Bumpy, wonky, bent? If you don't like your nose, you don't have to go under the knife to sort it out. You won't believe what can be done without surgery.

Non-surgical rhinoplasty, or 'the liquid nose job' is a non-surgical treatment option that can be life-changing. It's specialist. Not all aesthetic clinics offer it as it's an advanced treatment - it requires a lot of skill and expertise and even a medically-qualified practitioner won't administer the treatment if they don't feel 100% confident in their ability. But, if you find someone who does do it (search on Glowday) and you want to address your nose issues, it's an incredible treatment! We spoke to Victoria about her experience having a liquid nose job with Dr Steve Land from Novellus Aesthetics 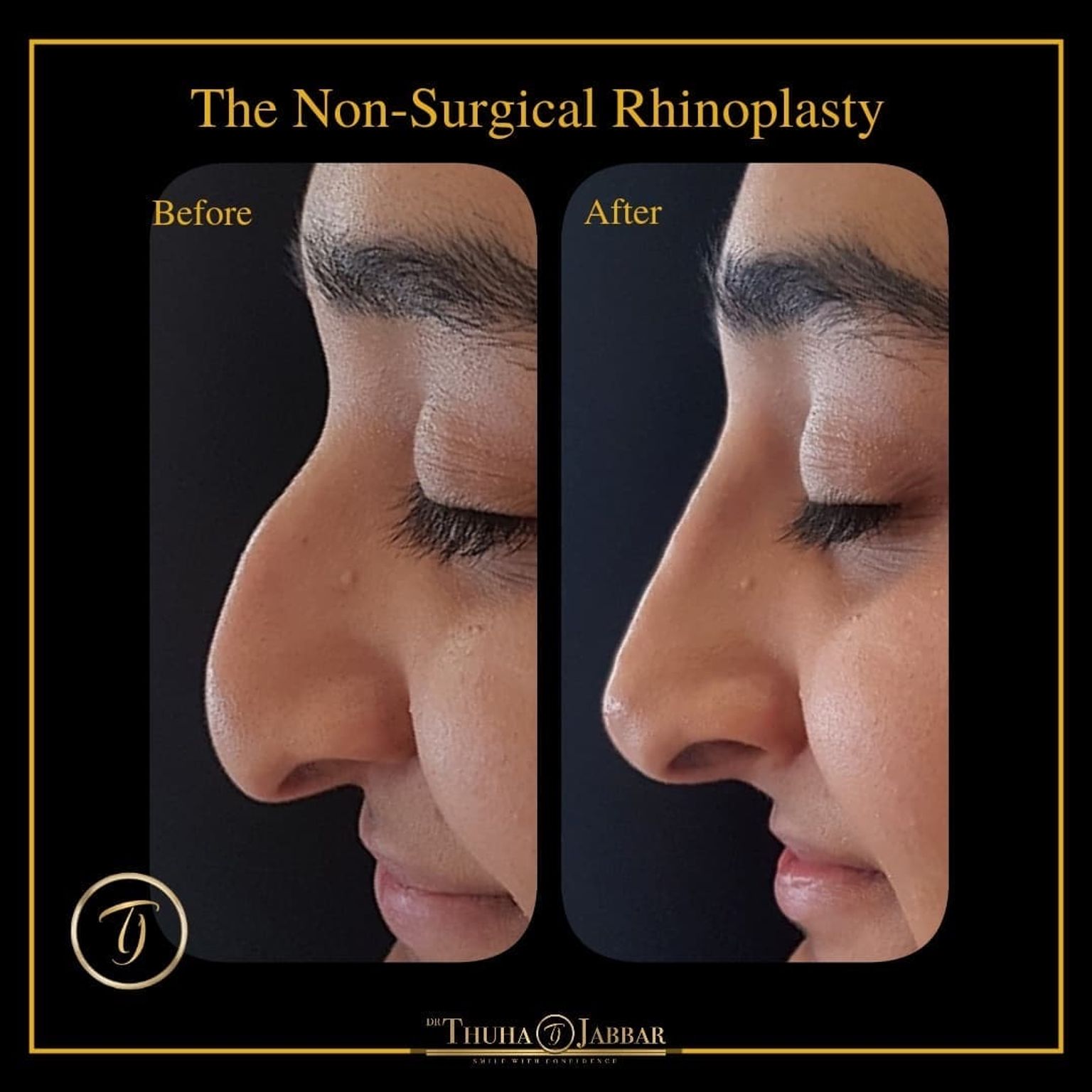 An absolutely incredible before and after of a liquid nose job, by the amazingly talented Dr Jabbar from Almas Dentistry And Aesthetics

How Much Filler Do I Need?

Hi Victoria! What was your main reason for getting liquid rhinoplasty?

I really wasn’t happy with my nose. I felt like it was crooked and I wanted it to look straighter, so I started doing lots of searches to see what options I had and where I could get a liquid nose job near me, and I went from there.

I started googling liquid nose job, 15 minute nose job and nose fillers and it came up with lots of results. I searched everywhere because I wanted to make sure the practitioner I was going to see was medically qualified and that I’d be in safe hands, and that’s why I went to Novellus Aesthetics - because I saw that Steven (Dr Steven Land) was a doctor. That made me feel a lot better.

Before I’d spoken to him, I just thought it was going to be a few needles in my nose - that’s what I’d envisaged happening. But it wasn’t. For what I wanted, Steven explained that a safer procedure for me would be a cannula inserted in the profile of my nose. He said that using a cannula - which has a blunt edge - is safer than a needle because there’s less risk of hitting a blood vessel. I knew this would be the right thing to do. I couldn’t really find a lot of patient experience around this online. I don’t know if that was a good thing or a bad thing. I did a lot of research but I couldn’t watch any videos about how they were going to do it.

So, I ended up asking Novellus if I could speak to another patient who had had it done and could tell me honestly what it was like. I spoke to a lady who told me what she’d experienced and I felt she was really honest with me because she said that when the needle first goes in it does hurt but that’s the worst bit and after that you can’t feel much because there’s anaesthetic in it. That gave me the confidence to go ahead with it.

How did you feel before your nose filler treatment?

I was a really, really nervous patient and I almost talked myself out of getting the procedure. And I was also terrified of googling things because of all the horror stories that are online. All the bodged stories where noses have got infected...so I made sure I was extra careful about who I selected and I was really happy with Steven’s credentials.

While I was in the clinic chair, I was really worried about it, as I’m quite squeamish. I started to get warm and was worried I was going to faint but it was just a tiny wobble. At one point, the needle was pretty much right between my eyes and I kept thinking, I can’t do this. What if it goes wrong?! But it was absolutely fine and Steven was really great with me. He knew I was nervous and he put me at ease. I had a really positive experience and I will get it done again. It should last a year so I’ll go back then.

Victoria’s non-surgical nose job before and after

That’s so positive! What have been the main benefits of the liquid nose job for you?

I feel happier with my nose now. My nose has really bothered me for a long time and it’s so much better now. I had a bump on my nose too and Steven’s smoothed that out as well and I’m really happy with how that’s turned out. It’s much less noticeable. I feel more confident in myself. My insecurities haven’t gone away completely but I definitely feel better about it.

What would you say to anyone who’s thinking about getting liquid rhinoplasty?

I would say do it! I’d definitely recommend it - it’s great. I’ll definitely have it done again, and Steven was really professional. I went to see him first to talk to him about it, and what would have been a red flag for me would be if he had kept pushing for me to have the treatment, but he wasn’t pushing me at all. I’d been worried about practitioners who were just there for the money but I got the impression from Steven that he was patient-centred and it’s what’s best for the patient - not about money in the bank. He didn’t make me feel worse about my nose at all. I immediately felt at ease with his response.

I’d also been worried about turning up for my consultation and being told that my nose was so horrific that I needed to have that filler, and I’d leave feeling worse about it. But that wasn’t the case at all. He just said it’s minor - no one else notices your nose. Here are your options and these are the risks. It’s totally up to you. I was reassured from start to finish.

The aftercare was great too. It wasn’t like “we’ve got your money and now we’re not bothered.” They told me I could get in touch any time I needed.

That’s great to hear! Have you told anyone you’ve had a liquid nose job? And do people notice?

I’ve told a few people including my best friend, and she said “Oh have you had it done?” It’s not such a massive change that people are going to necessarily notice but it’s really about how I feel.

Cost-wise, compared to a nose job, it’s not bad. It’s relatively affordable. It wasn’t an option for me to get rhinoplasty surgery because, chances are, it wouldn’t fix my issue. The cartilage down the middle of my nose isn’t in the centre and flops a little bit, so I could have it operated on but chances are it would happen again, so that’s why a liquid nose job was a good option, rather than paying a lot of money and having a lot of discomfort just for a surgical nose job to last such a short amount of time.

I hope I get to a point where I think I’m comfortable with my nose now and I’m going to let it be, but in the meantime getting the filler makes me feel that bit happier about it and more confident.

Well it’s great to hear that you’ve had such a good experience and that it’s making you feel more confident. Thanks a lot for sharing your story, Victoria!

If your nose bothers you and you’re thinking about getting nose filler, you can use Glowday’s search tool to look for liquid rhinoplasty experts in your area. They’re all medically qualified, so you’ll be in safe hands!

How Much Filler Do I Need?