Why Are Men Trolling Katie Piper For Having Botox?

It's frustrating when women pass judgement on other women for choosing to have non-surgical aesthetic treatments such as Botox and fillers. It becomes annoying when men decide they have a right to judge what a women does with their face. It turns to pure and unfiltered RAGE when a man criticises the absolutely incredible, inspirational, magnificent human and female idol, Katie Piper, for having cosmetic work. I mean. REALLY?

Yes, some random guy has criticised acid attack victim, writer, presenter and activist, Katie, for daring to promote her new book, A Little Bit Of Faith. He took to Twitter, with his 17 followers, to say:

" Oh dear. @KatiePiper_ (Katie Piper, who she?) with lips full of Botox and a designer face drawn by surgeons, on the advertising platform called Sky News promoting a publication about people needing to be honest with themselves. Couldn't make it up, could you."

The man has since argued that he is merely annoyed Sky is promoting a book, because it's meant to do news. Why then did he have to even mention how Katie looks, let alone use that as weapon?

Had this man taken just 20 seconds to Google Katie, before being, well, just horrible, this insipid male might have thought twice about posting that Tweet. Regardless, the fact he wasn't aware of her story only serves as a reminder that we live in a society where people believe it's reasonable to troll females for the way they look.

Katie defended herself with some kick-ass replies and an open letter. She went on to say: "I see this negative attention thrusted mostly upon women. I obviously haven't had work done to my face for a vanity reasons, but even if I had, that is NOT a problem. Why do women always get torn down about their appearance?”

Choose from hundreds of medically-qualified practitioners on Glowday.

Feminism has a long way to go.

Why indeed. Sigh. Why are women fair game to be judged for how they look? We see it all the time in the media, whole articles on the shoes of female politicians, the newsreader's choice of dress, the doctor who wears a low-top cut. Indeed, in 2017, the Daily Mail’s front page was of Theresa May and Nicola Sturgeon, the Prime Minister at the time and the First Minister of Scotland, with the headline “Never mind Brexit, who won Legs-it!”. These two women were debating the prospect of a second referendum on Scottish independence and the triggering of article 50 yet Britain's most-read newspaper decided to turn into a pageant. And how many times do we read about how much a woman's dress cost? I don't see many mentions of how much Prince William spends on his polo shirts.

You never know why someone has had Botox.

Tweets like this are sadly, normal. Men and women on social media criticise other people for how they look. Cosmetic treatments such as lip filler and Botox are contentious. This is, in part, driven by sensationalism. We don't tend to see photos of the millions of ordinary women who regularly have Botox, yet still look like their natural selves. We do see lots of photos of celebrities with overly-inflated lips, puffy faces, and fox-like eyes. This fuels the misconception that everyone who has Botox and fillers looks like each other. However, critics also tend to be those who are comfortable, confident and happy with how they look. Their appearance doesn't bother them. They don't care. So, they can't understand why women have Botox and fillers. While it may seem vacuous and vain to them, that a woman would want her nose reshaped with filler, or her frown lines fixed with Botox, for the woman, having that treatment it can be literally life-changing. What may seem 'pointless' or 'not needed' by the friend, the husband, or the complete stranger on the internet, may be the the difference between that person feeling depressed or happy, shy or confident, positive or negative. It's as simple as that. And it if it just vanity, why is that a problem? Why is vanity frowned upon? 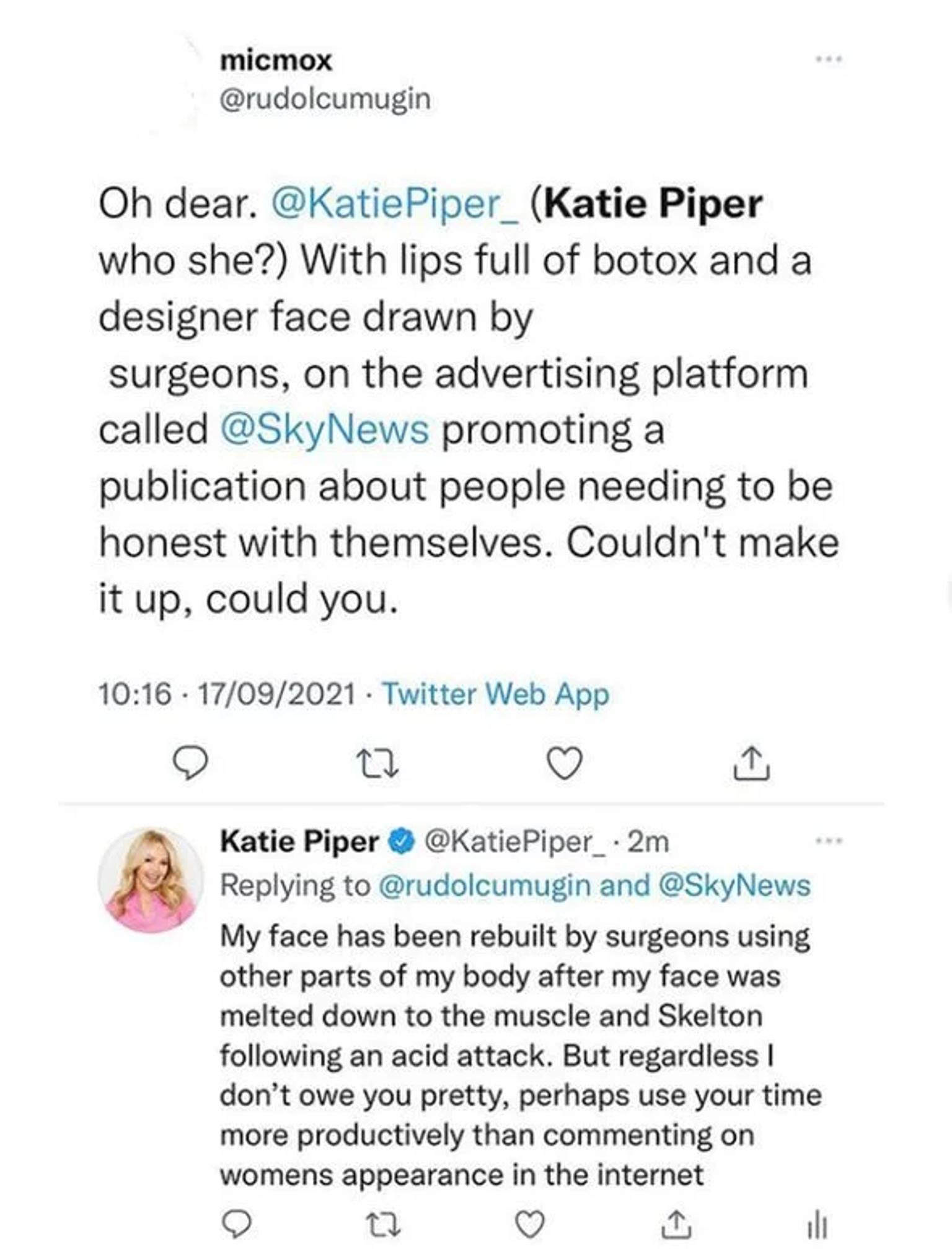 Can you get Botox and have morals?

What the tweet about Katie Piper reveals, is that some people believe that aesthetics and morals are intrinsically linked. That what you do to your appearance is a reflection of your values, morals and behaviour. He implies that a woman can't have Botox yet talk about being true to themselves. That it's fake, fraudulent and hypocritical. That essentially you can't be a good human if you also get Botox.

This is why we need to change the perception of cosmetic treatments and tackle the misconceptions. Would he have said the same if it was a guy who had just had his teeth straightened and was promoting a book about self-love?

We have to normalise these treatments in the same way we have with wearing make-up, getting our nails done or having our hair highlighted. Sure, it's important they aren't trivialised and people always consult a medical professional for any treatments, but the purpose and outcome is the same: empowerment, feminism and choice. Do what you want. I hope that this guy's trolling and subsequent media coverage results in opposite of what he wants - Katie's book becomes a number one bestseller! Couldn't make it up, could you...