If you don't know Alison Stankard, aka Totes Inappropes, we urge you to give her a follow on Facebook. Alison is the perfect poster girl for non-surgical aesthetics, proving they don't make you look fake and when performed by a skilled medically qualified practitioner, simply enhance, refresh and rejuvenate the face you already have. Totes first became a fan of Botox and more recently Totes discovered the joys of Profhilo - here she tells us why she thinks this treatment is actually nothing short of a miracle and shows us her before and after of Profhilo.

Reversing the Hands of Time: 4 Tweakments for Ageing Hands

Book your Profhilo today on Glowday.com - find a practitioner near your and secure your appointment directly!

I laughed in the face of skincare!

So, here’s the thing. I spent my youth (as the youth are prone to do) not giving a second thought to how I was going to look as I aged. I don’t think that I ever imagined a time past the age of thirty, never mind careering head long towards fifty. I misspent most of my youth frequenting the Hacienda, Cream or Hard Times (cool clubs up North in the nineties). I smoked Silk Cut, didn’t sleep enough, drank as though it was going out of fashion and laughed in the face of skincare. Skincare wasn’t as big back then. I was skint having spent all my money on clubwear and going out to dance on speakers in cavernous, sweaty nightclubs. I bought moisturiser and slapped it on occasionally when I’d remembered to not go to bed in my makeup.

And then I grew up. That’s not to say that I now feel any older or act in a way that could ever be described as wise or mature. I am still a massive arsehole whom is likely the first to arrive, most prone to dance like a maniac and last to leave any party. Somehow though, I’ve managed to acquire in no particular order, a husband, a mortgage, three darling children AKA the three little shits and a rotund dictatorial Pug.

Let’s just say though that my skin hasn’t really always been looked after. I’d far prefer to have fun than look after my skin. Conversely though, I am quite vain. Basically, I’m a walking talking contradiction. I want to have my cake and eat it. I want to look amazing without any effort but frankly what sane person doesn’t?

The Perimenopause changed my face

I stopped smoking before I had the kids but in having the kids, I put on and lost quite a lot of weight three times. I wasn’t looking that bad…I took up running…I wasn’t looking that bad and then the thing that made me look bad; the peri menopause. Almost overnight (oh okay, I might be exaggerating) I went from a goddess (in my head) to well: certainly not a goddess and possibly somebody who was really starting to look very middle aged.

Middle aged. I know, we should embrace it, but nobody wants to look in the mirror and see an old person with jowls looking back at them. Young people think that it’s okay to have a few nice laughter lines. That bit’s fine. It’s when your face and neck start merging into one continuous sagging mess that you start panicking and Googling the cost of lower facelifts. (I’ve enquired and unfortunately, it’s prohibitively expensive and looks brutally painful)

About five or six years ago, my sister dropped a veritable bombshell into conversation in a positively casual manner that she’d had Botox. I was shocked… Appalled and envious in equal measures. Appalled that I’d never even considered having anything like that done and that she’d made a decision about something so unbelievably massive without even seeking my ‘big sister’ advice and envious that I’d not also had it done first. I examined her face when she wasn’t looking and became more envious. I was positively seething with sibling jealousy.

She looked fresher, younger… If she hadn’t told me that she’d had Botox, I don’t think that I’d have guessed. I’d have just presumed that she’d bought some great foundation. Maybe found a new wonder face cream.

You see, in my head aesthetic procedures were the preserve of celebrities. There were the celebs that looked good and had, had work done and there were the ones that looked a bit frozen and weird. Normal, everyday people of my age didn’t have aesthetics back then and if they did, they certainly weren’t telling people about it. My sister was the first person that I knew that had had any treatments of this kind. My age group (I’m forty-eight) had all been scarred by the very famous female actress in the nineties who had her lips done to disastrous consequences and has rarely been seen in the public eye since.

I started having aesthetic procedures around four years ago. I was lucky and I could have been unlucky. I found a lovely nurse prescriber who for her day job also headed up a department at our local Hospital. I had a bit of Botox every now and again and all was well. I was looking pretty good…Pretty good that was until I started experiencing the disastrous and very unfair effects of the peri menopause. 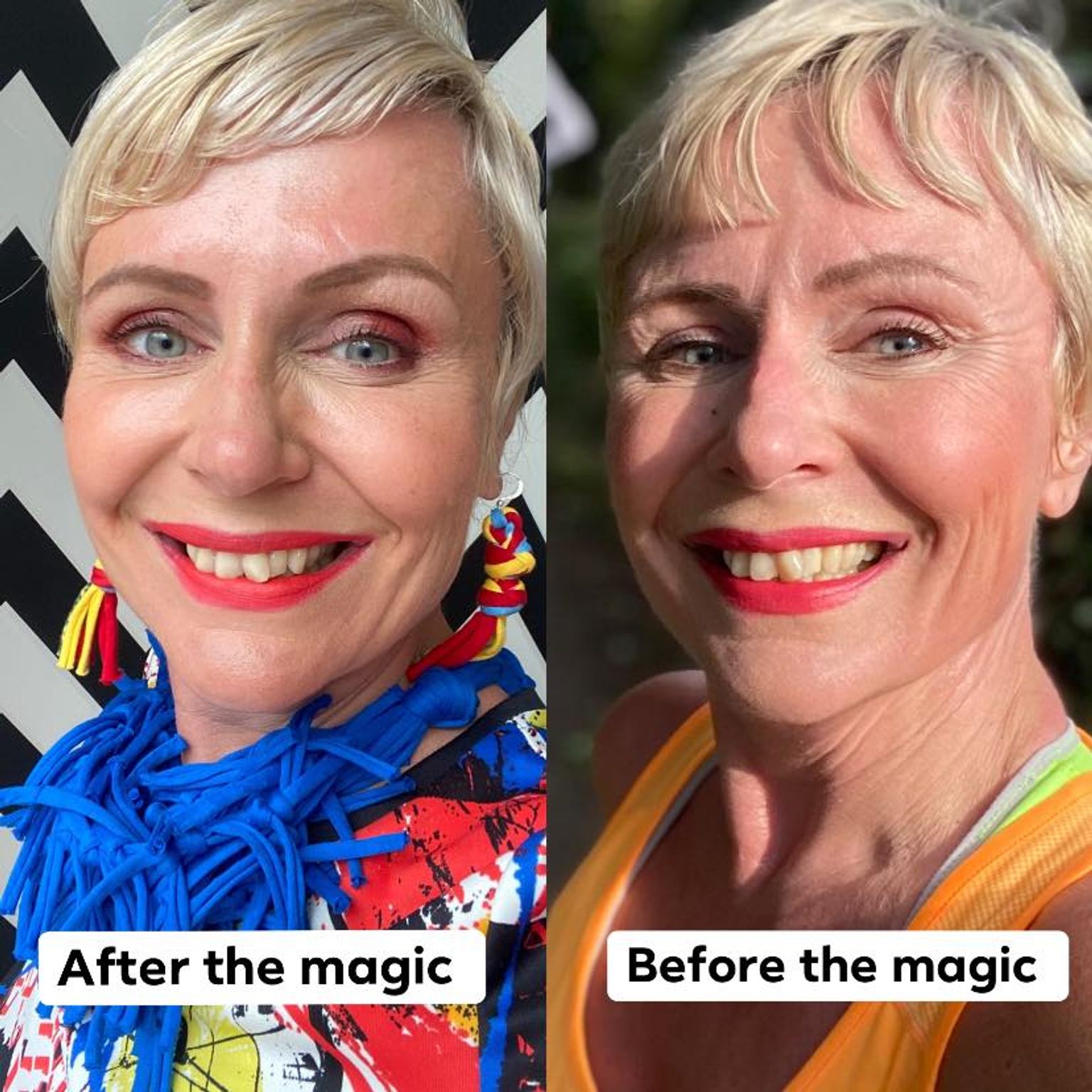 Alison before and after (or after and before!) having Botox

How the Perimenopause aged me

The many symptoms of the peri menopause are bad enough without adding insult to injury. The diminishing oestrogen plays a massive part in the ageing process of the skin. Skin becomes thinner with less collagen with decreased elasticity, increased wrinkling, increased dryness and reduced vascularity. My forehead looked good but all of a sudden, my lower face had started to look like it was heading south. I had the start of jowls. My neck had lost all elasticity. I could pinch the loose skin on my neck and pull at it. When I pulled at the loose skin, it stayed where I’d pulled it to for just a fraction too long before slowly heading back to where it should be. My neck and around my jawline, in fact – the whole of my lower face had started to look a bit like a deflating balloon. It had lost a certain plumpness that youthful skin has.

I did what any wise person would do under these circumstances. Where some might have taken up facial exercises, I simply invested in scarves. I also made damned sure that when I took a selfie, it was from slightly above and never straight on. Luckily, I like scarves and if I do say so, I take a fucking excellent selfie.

I had moved on from the original nurse who had done my Botox to another amazing aesthetician who had been highly recommended. I’d heard good things about a new treatment called Profhilo. Profhilo was hailed as the new wonder treatment to restore firmness and hydrate skin. What’s more it was ideal for the lower face and neck. I talked to my aesthetician about it.

Had I invested too heavily in scarves? Too fucking right, I had. We decided together that Profhilo was a good option for me.

Profhilo is a wonder treatment.

It really is amazing. Profhilo is a revolutionary ‘beneath the skin’ hyaluronic and moisturising treatment. In short and without boring you to death it improves skin laxity, boosts and hydrates the skin and stops the dreaded sagging. It can be used all over the body (even on that wrinkly skin above your knees) but is amazing for necks and cheeks.

I had the first of two, possibly three treatments that are needed on my neck. The treatment is very straight forward. It’s ten injections in the neck at measured intervals. It’s worth knowing that the treatment is slightly uncomfortable and stings a bit but the good news is that it’s soon over and very much worth it. After I’d been injected, my neck did look like I’d been stung so it’s probably not advisable to arrange a lunch date immediately after treatment. 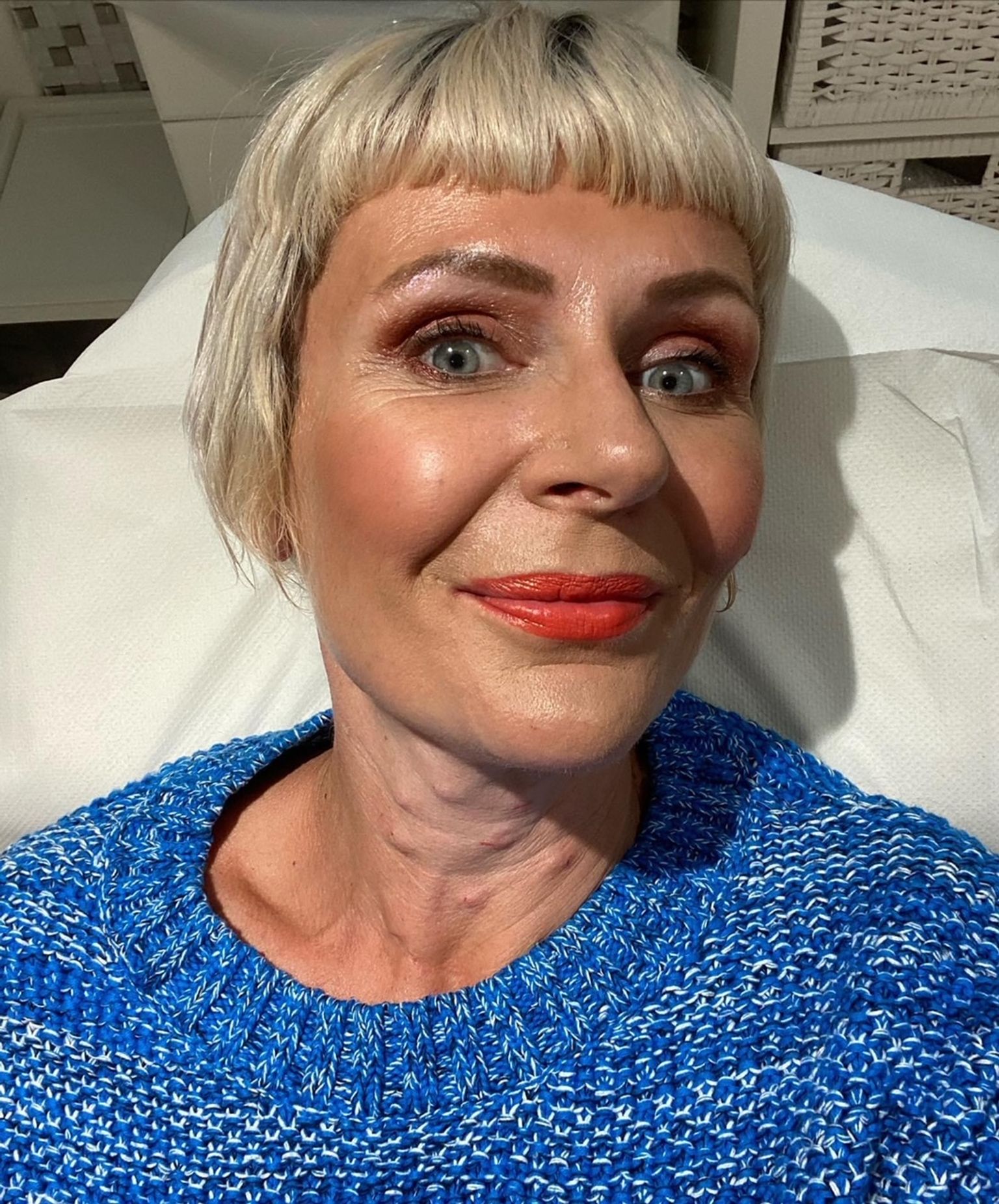 Totes immediately after the Profhilo injections which were performed by The Clinic Cheshire & Hampshire (not on Glowday).

In the first couple of days after the injections there was no real improvement. I’d been advised that this was to be expected but a week in and I noticed that my saggy neck skin seemed improved. It wasn’t as loose. I couldn’t get hold of quite as much loose skin as I had been able to previously. When I did pinch my skin, it moved back to where it should be much quicker than it had done previously too. Four weeks in and by my second appointment for the next ten injections and there was a visible change. The skin was tighter, plumper, smoother.

And things continued to improve. I had my second appointment for Profhilo and decided to also have my face injected. In total, I’ve had two treatments to my neck and also one treatment to my face. I have been blown away by the results and so has my aesthetician. The difference over eight weeks to my neck is subtle and yet amazing. Profhilo does what all those expensive creams claim to do but don’t. It simply restores elasticity and volume. Plumps up the skin from within. 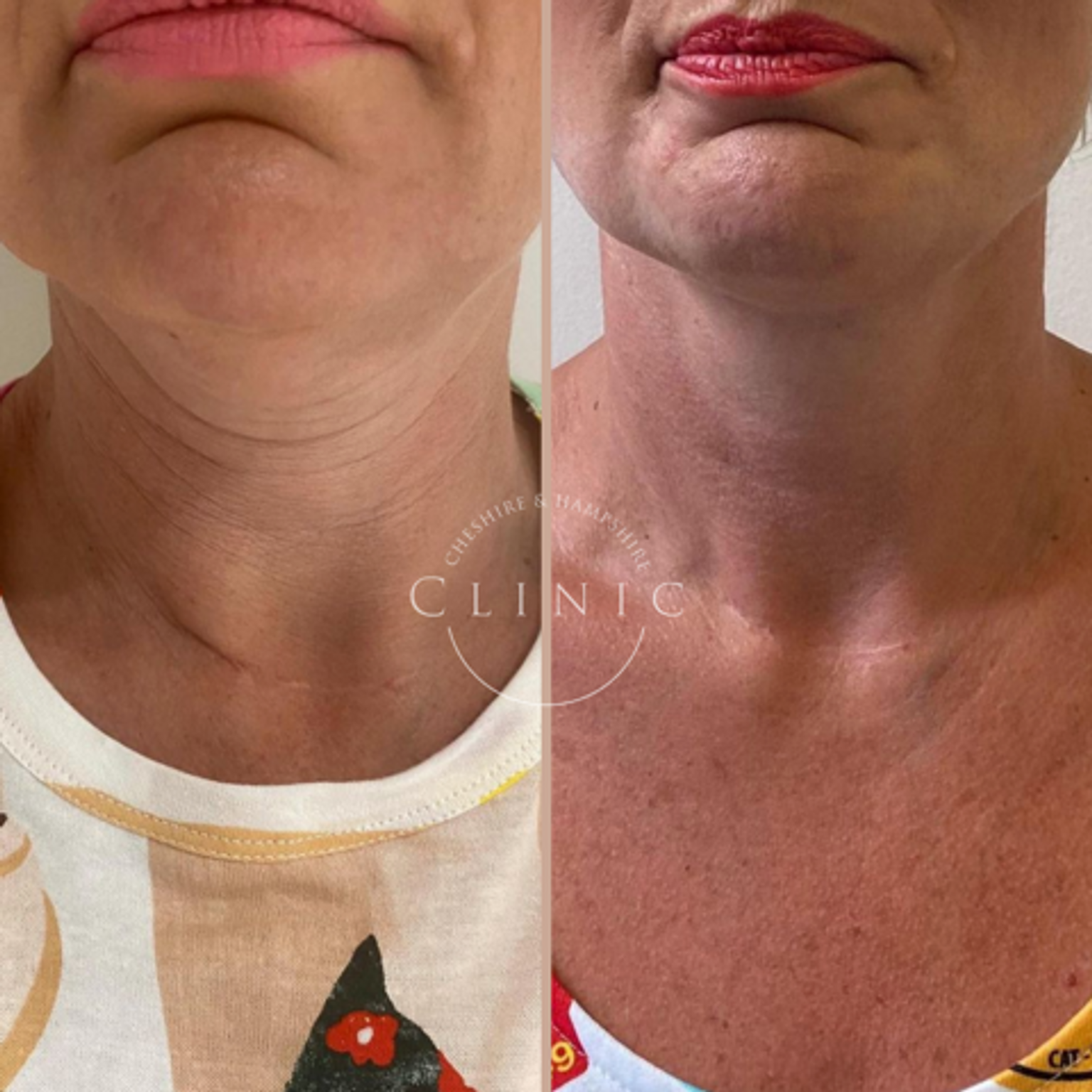 The before and after of Profhilo, which was performed by The Clinic Cheshire & Hampshire (not listed on Glowday)

Profhilo is quite simply revolutionary and I am sold on it. It's not invasive and gives very good results. I do believe that it's really important women see a medically-qualified practitioner for any treatment and they find someone like I have, who really knows what they're doing.

I will be casually dropping that I’ve had it done into conversation with my sister to get my petty revenge on her for her having had Botox first.

To find your local Profhilo practitioner and book in directly you can search Glowday right here. Time to get Glowing!

Reversing the Hands of Time: 4 Tweakments for Ageing Hands