Ever wondered how to deal with hyperpigmentation and melasma? Up next in the Skincare Diaries series is the awesome Dr Soul Mugerwa of Nouvelle Aesthetix, who explains how he's reached a place where he's finally happy with his skin.

Hi Dr Soul! Thanks for joining me. Talk us through your hyperpigmentation. When did you first notice it?

My biggest concern is hyperpigmentation and uneven skin tone. This is due to a combination of previous acne and pimple-related post-inflammatory hyperpigmentation and melasma, and it's something I first noticed in my early 20s. I used to get pimples in my late teens and through my 20s, and each spot, particularly the deeper ones, would leave semi-permanent dark marks. Eventually, these would coalesce, forming larger patches. I also noticed that my skin appeared darker around my cheeks and forehead.

That's a tough thing to experience as a young person. What have you tried over the years to remedy your pigmentation concerns?

Over the years I have tried numerous different things to try and remedy it. I initially tried topical serum containing mandelic acid. This was recommended by the first ever clinic I attended in my mid 20s to see if they could help. Mandelic acid, at the time, was thought to be a useful treatment in hyperpigmentation and an alternative to hydroquinone. I had read about hydroquinone but, at the time, most of the information that I could find mainly highlighted the potentially negative effects. Also, the products containing hydroquinone were marketed as ‘skin bleaching’, which put me off. I certainly didn't want to bleach my skin. I have dark skin and I like it, but I wanted it to be as even-toned as possible. I used this cream for around 6 months and saw absolutely no difference, so stopped using it.

After a few years I was recommended a glycolic and lactic acid peel. This was my first time having a chemical peel and, although apprehensive, I went ahead. After a couple of days I started peeling and thought "Great! This must be working." I couldn’t wait to see the new skin underneath. Seven days passed and the shedding had stopped, however my skin was no different and I was back to square one. I went on to try several other chemical peels, each one recommended by different clinics. I had a course of three or four PharmaClinix Lightenex peels over the space of around 18 months, in combination with the home creams. This treatment plan actually did help to some degree, I would say there was about a 20% improvement in the melasma and hyperpigmentation, but it was still very visible. This was encouraging and at least I had found something that did work, even if it was in a limited way.

Unfortunately, the clinic advised me that only up to a certain number of treatments was possible, so I couldn't just keep having regular three-monthly peels. A few years later I saw another doctor in Liverpool, who recommended a course of intravenous glutathione and vitamin C, in combination with a course of three microneedling treatments and three Perfect Derma peels. I knew glutathione was a powerful antioxidant and was also useful in skin pigmentation, so I was excited to see if this seemingly all encompassing treatment plan would work. I was wrong and, unfortunately, the peels and intravenous drips had zero effect. On the upside my skin felt baby smooth and glass-like thanks to the microneedling.

Having tried all of the above with minimum effect, I felt hydroquinone was the only thing I hadn’t tried. After doing some in depth further reading on its safety and effectiveness I was now ready to consider it. I was prescribed 4% hydroquinone and 0.025% tretinoin followed by 4% niacinamide and 0.025% tretinoin. I found that the niacinamide helped to blend my skin better and improved my skin texture in general, but the hydroquinone hadn't worked, unfortunately. 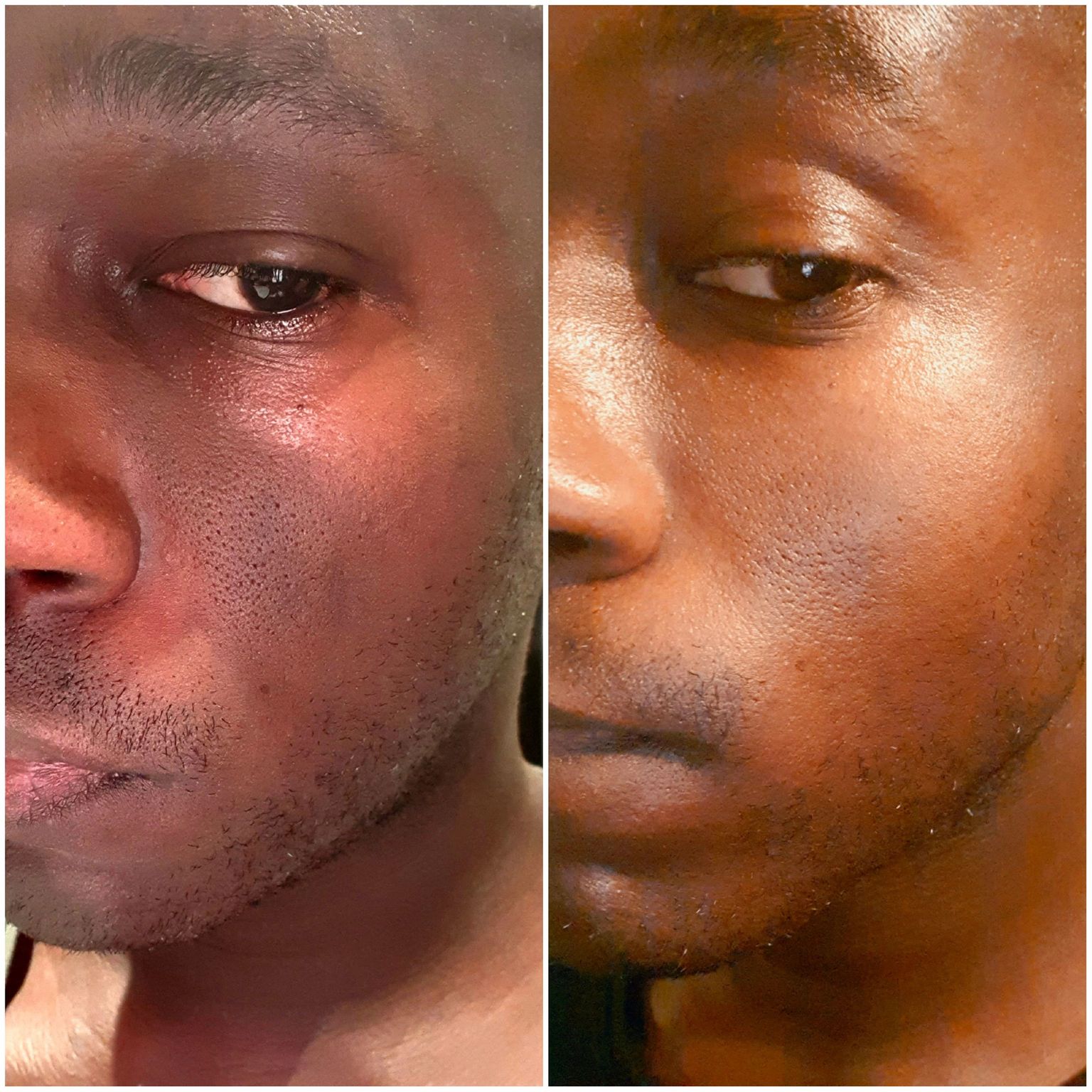 What's been the most effective pigmentation treatment you've tried?

The most effective treatment I've had so far is the Mesoestetic Dermamelan peel. I would say this has provided about 50% improvement in my pigmentation. After completing the initial post-peel treatment plan I have a daily regime which has helped prevent blemishes and further pigmentation.

As my cleanser, I currently use Skinceuticals Blemish and Age cleanser in both the morning and evening, and I've found this to be the most effective for my skin. This contains glycolic and lactic acid, which help unclog pores and prevent breakouts. My skin is virtually clear of spots and breakouts since I started using this. I follow this up by using Phloretin CF as my daily antioxidant in the morning. Then, I apply Mesoestetic 130+ SPF, which is a broad spectrum SPF that also provides protection against high energy visible light from screens. It blends nicely on dark skin because it doesn’t leave that chalky white residue that can make you look like a ghost as with some mineral SPFs. I reapply this again in the afternoon. In the evening, I use the Dermamelan cream after cleansing to keep the hyperpigmentation from returning.

Don’t give up just because one treatment didn't work. There is no one magic bullet and it is also important to set realistic expectations.

What would you recommend to anyone who suffers with hyperpigmentation and melasma?

The key to treating most skin issues is persistence and consistency. This requires patience, compliance and trust in your provider. We all want quick results, and it can be disheartening to not see much improvement for weeks when you start a new treatment. I think it's important to be aware that there are many treatments and they all work in different ways. What works for someone else may not necessarily work for you, and that's just the nature of medicine, skin and treating people in general. Don’t give up just because one treatment didn't work. There is no one magic bullet and it is also important to set realistic expectations. Over the years, I have come to terms with the likelihood it will never be 100% gone. But it has improved and I'm happy with that so far.