Do I Have The Tyndall Effect?

We often hear about the serious complications of fillers such as vascular occlusion but there are some lesser-known and less-serious things that can go wrong when facial fillers, especially when they're given by poorly trained injectors. One of those complications is the Tyndall Effect.

Always see a medically-qualified medical practitioner for your filler treatment, find one close to you right here.

What Is The Tyndall Effect?

Bare with. It's very sciency! Essentially a beam of light gets scattered after striking the particles that are present in its path. An example that you might relate to is the blue colour sometimes seen in the smoke emitted by motorbikes. That's probably as much as you need to know! It's a physics thing.

What's This Got To Do With My Face?

Well, in aesthetics, the Tyndall Effect is used to describe the bluish hue that is visible within the skin, when fillers have been placed too superficially. Essentially the particles in the filler that's put in your face, reflects the light beams hitting your face.

Have I Got The Tyndall Effect?

Often it can be mistaken for a bruise but unlike a bruise, it won't resolve itself after a few days. Often, the area is slightly raised or lumpy due to the superficial placement of the filler. It may be hard to see in bad lighting but it's the kind of thing that when it's on your own face you'll notice it and it may make you feel really unhappy with the final look after the treatment. If it's not treated, it can last for many months, sometimes years. 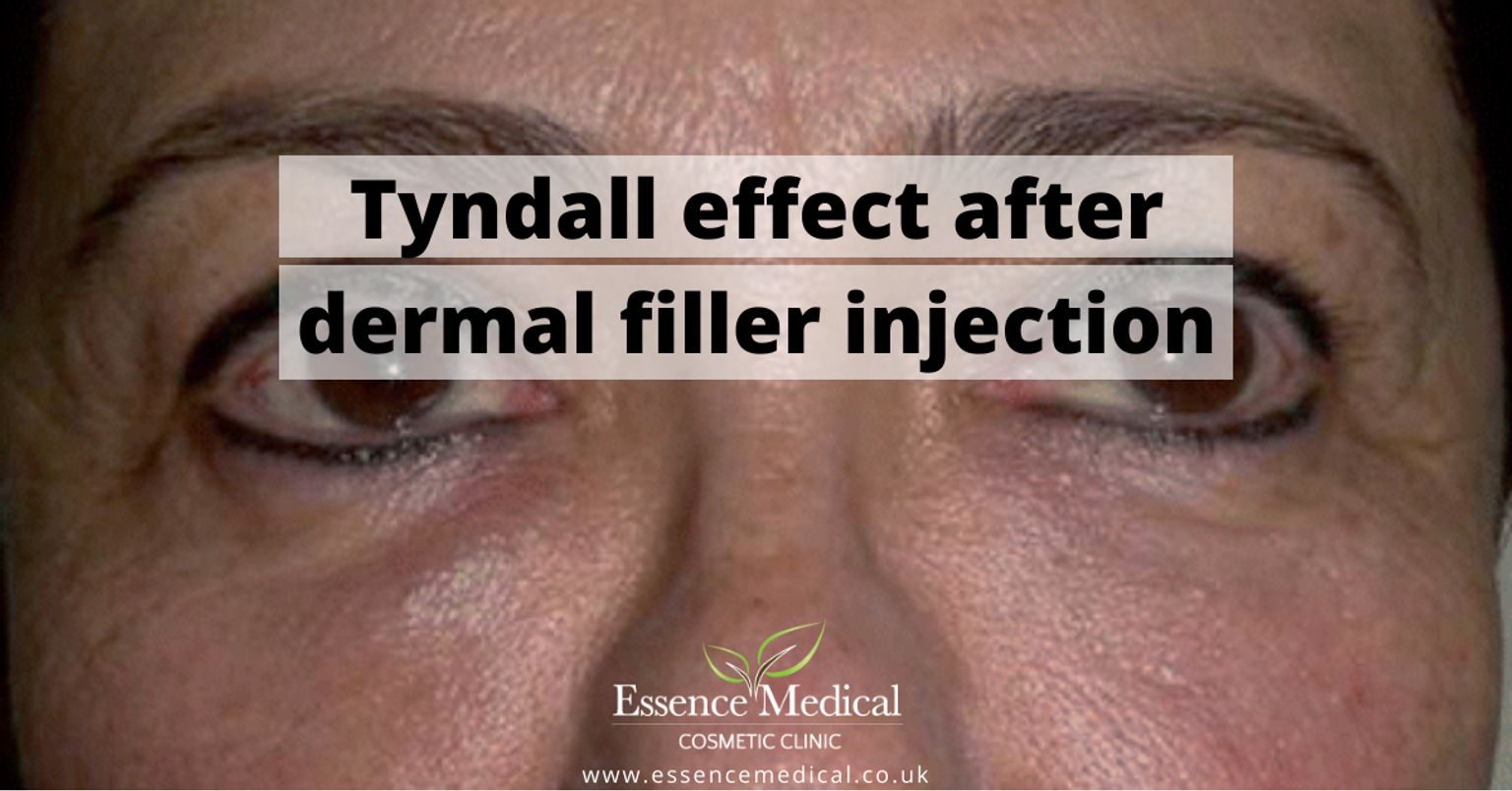 Often hard to see in photography and poor light but this is a patient presenting with the Tyndall effect with a blueish tone and lumps and bumps.

Where Does It Happen?

It tends to happen more commonly after tear trough filler injections and treatments for smoker's lines. That's because the skin is thinner in these areas. But it could also happen in other areas depending on the condition of your skin and your age. One report has suggested it is often reported in the nasolabial folds (the lines between your nose and mouth), which is more likely due to incorrect product placement by an inexperienced practitioner.

How Can It Be Avoided?

Choosing a medically-qualified practitioner with a lot of experience and skill in the placement of filler is the number one thing you can do to protect yourself from this complication. Find one near you, right here. Don't be tempted by cheap deals and don't be afraid to ask your practitioner about their training and experience. Ask them how they will avoid this complication and if they've never heard of it... that's your warning sign to run!

Can Tyndall Effect Be Treated?

In some cases, if it's spotted soon, massage can help. But more often than not the filler will need to be dissolved using hyaluronidase, which is a prescription-only product and must be administered by a practitioner who knows what they're doing. If you don't want more injections or treatment, then unfortunately the only real answer is good make-up to cover it. While it's not a serious complication and your health won't suffer further, it is not the right outcome and it can leave you feeling more self-conscious about you face, upset, frustrated and deflated. A good medically-qualified practitioner will be able to help you resolve it.

If you're interested in fillers then always consult with a professional! Find one close to you here.