Models, TV presenters, actresses, pop stars are all over Profhilo, so I decided it was time I found out what all the fuss is about. Easily influenced? Me? Never...

You can find a practitioner near you who offers Profhilo easily and quickly by using Glowday, try it out here.

It's not Botox, it's not filler, it's not a chemical peel. It does involve injections, but tiny tiny tiny ones, and if I was to describe it very simply to you - using an analogy you'll understand - it's like injecting 1000 tubs of moisturiser underneath your skin.

I liked the idea of Profhilo because it's not a toxin, which I'm not quite ready for yet (although that's next on the list!) and rather than it being a treatment which adjusts or fixes something on my face, it's a treatment for my skin.

I spend a lot of money on skin products. A lot. And I can kinda live with my lines and wrinkles for a bit longer if my skin is in good nick, but over the past couple of years my skin just isn't what it used to be.

What is wrong with my skin?

So there is nothing wrong with it per se, I don't have a skin problem. But I'm 43 and ageing is playing its cruel part. My skin is dull and losing volume and I just feel a bit drab and haggard. Yes, I've also got lines in my forehead, crows feet and a particularly deep crevis running down the side of my mouth (nasolabial folds) and generally my face is just dropping - my jowls are starting to take on a life of their own. However, I feel focussed on sorting out the foundations of my face before I start on the scaffolding! I started a proper skincare regime using Alumier medical grade skincare products in lockdown, which has made a huge difference, but I still felt my skin needed an extra boost.

This is where Profhilo came in. After writing about it a fair bit for Glowday, I decided I wanted to try it. It was time to dip my toe into non surgical aesthetics. Profhilo is defined as a 'bio-remodeller' (so it literally remodels your skin) and it is injections of hyaluronic acid, which we have in our bodies anyway (just less of it as we get older). It boosts collagen within the body, giving great texture and brightness to dull, dry or ageing skin, and reducing crepey, sagging areas. It just makes it all a bit firmer!

You might be thinking, “Profhilo or fillers?”, which is a very good question. But while the two treatments are similar in the sense that both involve injecting hyaluronic acid into the target area, Profhilo doesn’t give the volume that fillers provide, and it doesn’t change the structure of your face. It is simply about rehydrating the skin and making it appear more radiant.

I had my Profhilo with Shelley Folkes at The Glow Clinic Hereford. I feel really safe with Shelley, not only is she well trained in aesthetic treatments, Shelley is a nurse and spends a lot of time in A&E! She is extremely reassuring and very cool, calm and collected. Doing these treatments is, for her, as ordinary and routine as it is for me to send an email. It's her job, it's her area of expertise and she is used to patients being a bit anxious, worried and she is very used to people feeling a bit faint or sick! Shelley makes you feel safe and relaxed.

Shelley marked up five areas on each side of my face where she identified would be the best places to inject the Profhilo, which is like a gel-like substance delivered through the tiniest needle you've ever seen. Did it hurt? No. Did it feel a bit weird? Yes. I would say there is slight sting, that isn't painful and certainly no worse than having your bikini line waxed or your eyebrows threaded! After the treatment you're left with little bumps, like bee stings, that disappear within 24 hours. Some areas of the face may feel more sensitive than others, there was one point on my upper cheek where I did do a 'Oooooh, I can feel that one' but it wasn't painful, just a slightly strange feeling! 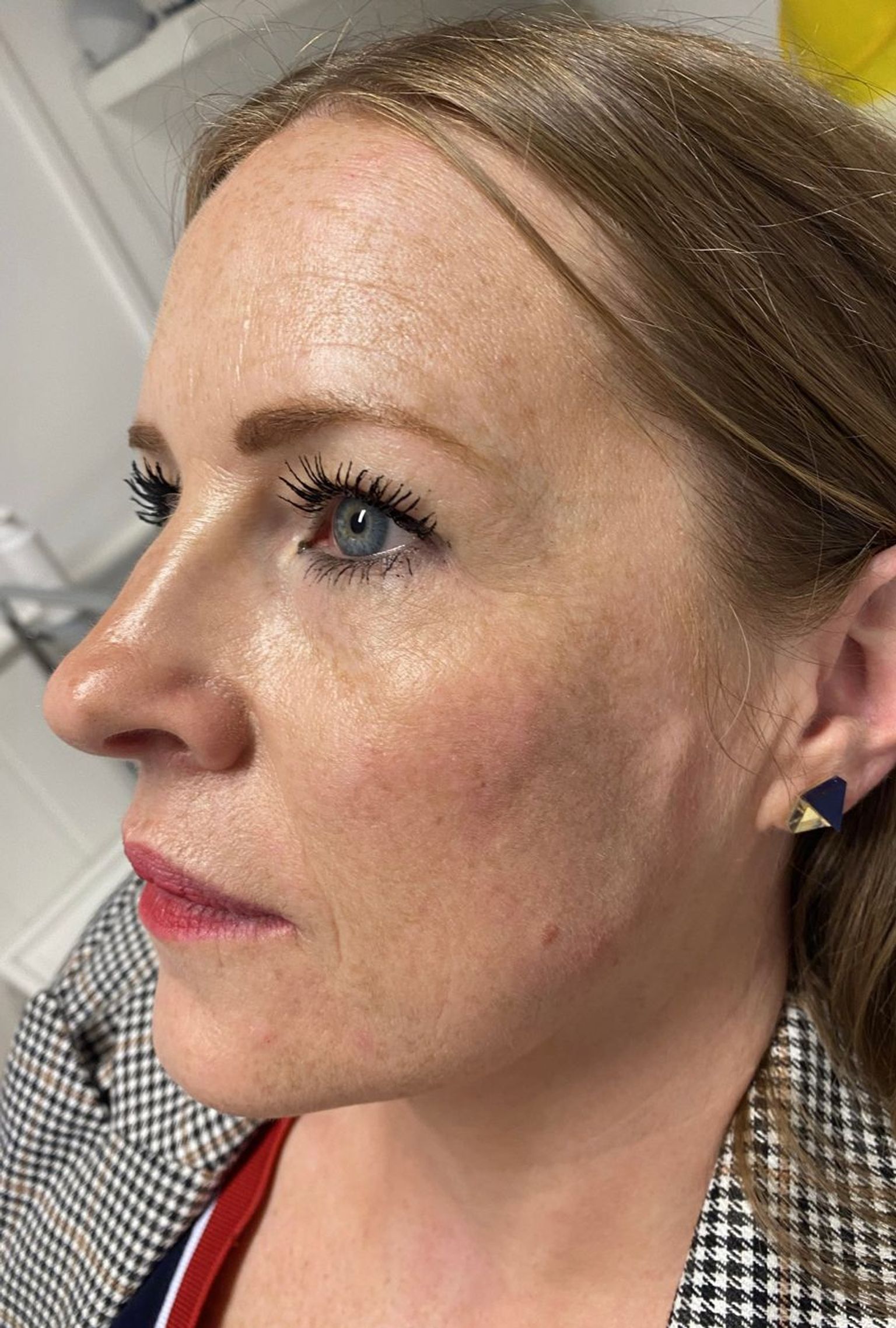 Just after my first Profhilo session, you can see the slight bumps that are left immediately after the injections are made. They feel like small peas under the skin but they had dispersed by the next day.

You need to have two sessions of Profhilo to see the full results, six weeks apart. However, I noticed a difference after the first session. It's not a treatment I think anyone else would notice. My husband certainly didn't tell me I looked glowing but he doesn't notice when I have six inches cut off my hair. But I noticed. After the final session, there was most certainly a change in my skin health. It is more plumped, it has some of the volume back that I've lost due to ageing, it feels more bouncy and firm. It looks more dewy and hydrated - as if I've been drinking 10 pints of water a day (I most definitely haven't been). My make-up is sitting better - indeed I don't feel as if I need the normal amount of foundation and concealer I'd usually trowel on. The biggest change I've noticed, however, is a softening of my fine lines. They haven't disappeared completely (I will need some dermal filler for that!) but they are FAR less noticeable (to me!) and my deep crevice isn't as deep! My foundation used to collect in that ravine, now it just sits nicely on top. 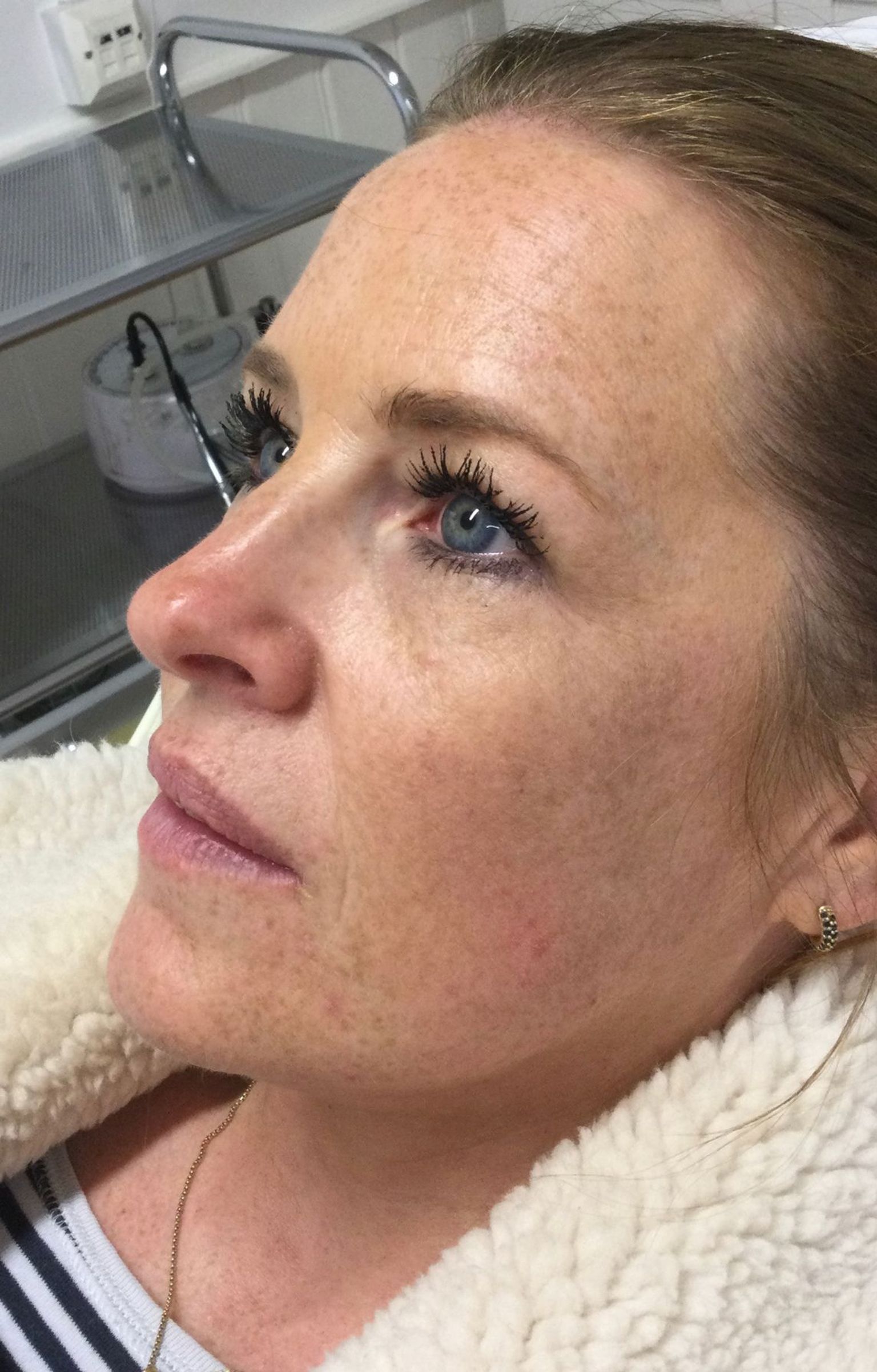 Just before my second session.

How much does it cost?

It's not a cheap treatment. I paid £300 for the first session and £250 for my second session. I will need to repeat it every six months to maintain the results, so I'm looking at dropping £250 every six months. BUT, if you're someone like me who spends a lot of money on lotions and potions, I would argue this is cost effective. I've decided to put away £40 every month to 'save up' for my next session. I easily spend £40 a month in Boots on foundations, creams, moisturisers and just STUFF that doesn't really work, so this makes more sense. By jove, I'm practically a money saving expert!

Is Profhilo worth it?

I would say Profhilo is a great first treatment if you've never had cosmetic treatments and you want to do something but you're a tad trepidatious. I understand if you are, I am too and despite being on the Glowday team and being armed with a lot of knowledge, I'm not yet ready for Botox and fillers. I have noticed an improvement to my skin but it's subtle and it's not the kind of thing you'll see on a dramatic before and after photo. I don't believe everyone will start commenting on your face or notice any change. However, it's very personal and results will vary from person to person. If you read this piece from fashion blogger and social media personality Totes Inappropes, you can certainly see a vast difference and improvement.

In conclusion, it's made me less anxious about trying other treatments now and I'm happy with the result. It's a good entry-level treatment and most practitioners I have spoken to will say that sorting out your skin and making sure that's in tip-top condition is the right thing to do, before you go onto the next 'level' of treatments. I'm definitely going to try something else, this has given me the confidence.

It helps that I trust Shelley and the great thing about Glowday is that you know every practitioner who is listed with us will uphold the same standards, have the medical knowledge and experience and will keep you safe. So yes, I would say it's worth the money, for me, and it's worth seeing who we have on Glowday who offers Profhilo near you - book in for a consultation - I don't regret it and I'm sure you won't!