Angry Face! How Can I Get Rid Of My Frown Lines?

During a recent survey carried out by Glowday, around a quarter of women believed that lockdown had aged them and while some ‘VID 19 trends were fleeting ( anybody still drinking Dalgona Coffee?) it seems that some are proving harder to shift – yes we’re talking about your frown lines.

Move over Botox - It’s All About Fillers In Your Forehead!

Ready to book a consultation for your frown line fix? Choose a practitioner and book in directly from your phone right here

What are frown lines?

Despite their name, frown lines aren’t necessarily just caused by frowning. When you smile, laugh, or squint, your facial muscles are worked hard and eventually the skin above them often begins to wrinkle. Sun damage and the loss of collagen and elastin of the skin can make these wrinkles worse.

When we’re disappointed or angry, our faces show it. Whether it’s your partner picking you up 2 hours late from the airport, a news story that’s annoyed you, or your gorgeous new coat getting splashed by a passing car , the face don’t lie. It’s not only frustration that creates frown lines (also known as 11s)! Bright sunshine that makes us squint also causes us to scrunch the muscles that create these lines, as can pain.

Given that we’ve just gone through 18 months of intense stress and uncertainty, where I’m sure most of us were flitting between squinting at impossible home-schooling assignments or laughing hysterically at the absurdity of making 20 million loaves of banana bread which nobody eats, it’s not surprising that our furrow lines have become deeper and our frown lines are multiplying.

Stress can cause wrinkles to form because high amounts of cortisol, the stress hormone, can break down the skin's collagen and elastin. Research has found that chronic stress can increase inflammation, causing skin aging and accelerating the formation of wrinkles.

What can I do to get rid of my frown lines?

Here are a few treatments that you want to look out for.

There are several brands of botulinum toxin for reducing the appearance of lines and wrinkles, but the one that everyone knows seems to be Botox.

Botox is a popular and reasonably affordable treatment that helps to temporarily reduce the activity of the muscles that tend to cause frown lines on the face. It’s best used on lines between the eyebrows, horizontal creases along the forehead or lines along the upper lip. To reduce the appearance of dynamic lines, botulinum toxin is a great option. 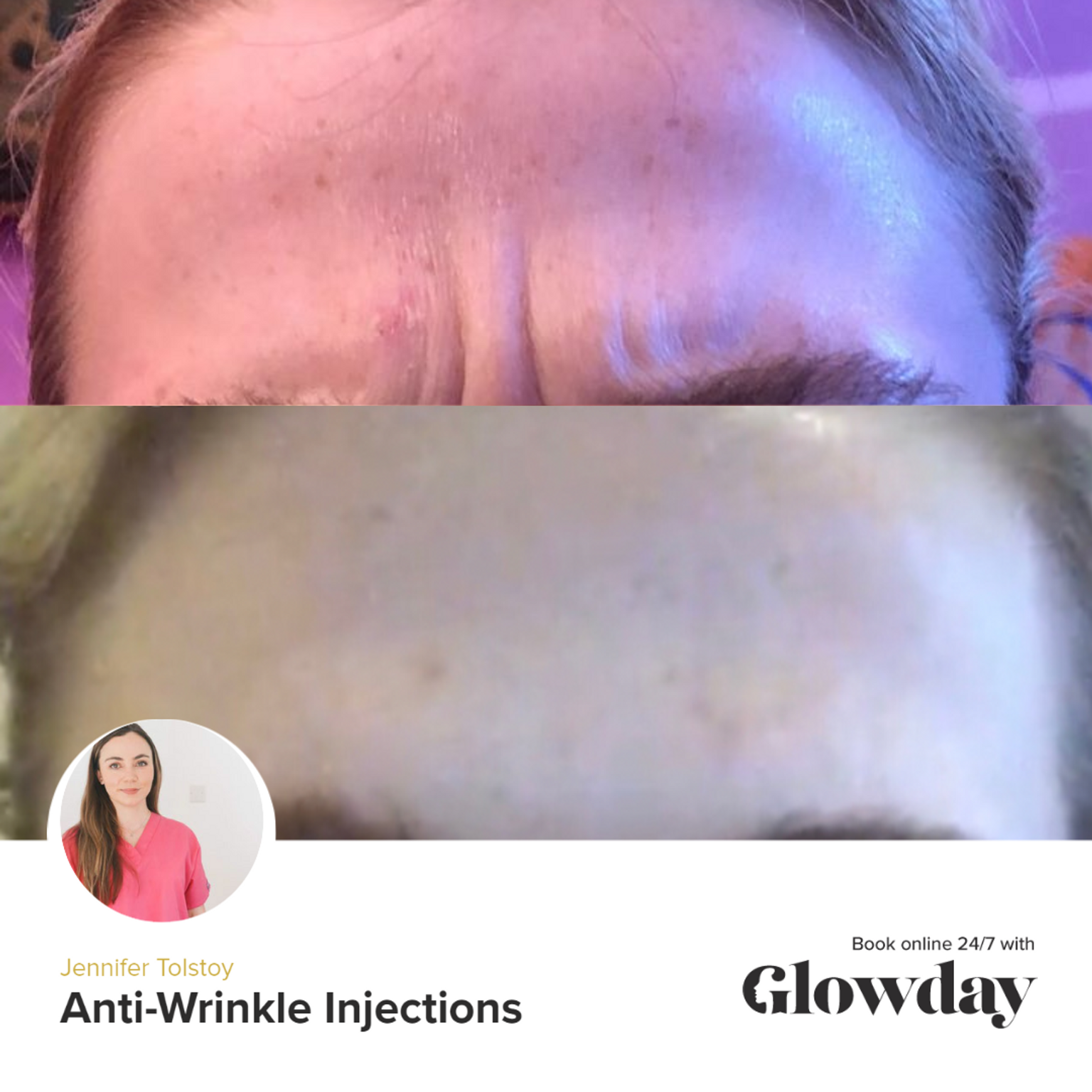 A before and after photo of a transformation of frown lines using Botox by Jennifer Tolstoy at JTM Aesthetics .

So, how does Botox work?

Tiny amounts of the substance are injected into the target area to temporarily paralyse the muscles. Because the muscles are able to contract less, this means lines and wrinkles in that area relax and diminish. But it only works on the areas that are injected, so a Botox injection into the forehead won’t minimise crow’s feet or bunny lines.

How long does Botox last on frown lines?

It isn’t a permanent fix - Botox lasts about three to six months, after which it is metabolised by the body. So, to maintain the effects, you’ll need to repeat the treatment. However, it can make a huge difference, minimising those wrinkles and taking years off you.

Facial expressions allow us to really show how we’re feeling, and we never want to get rid of them - just the lines that happen as a consequence. 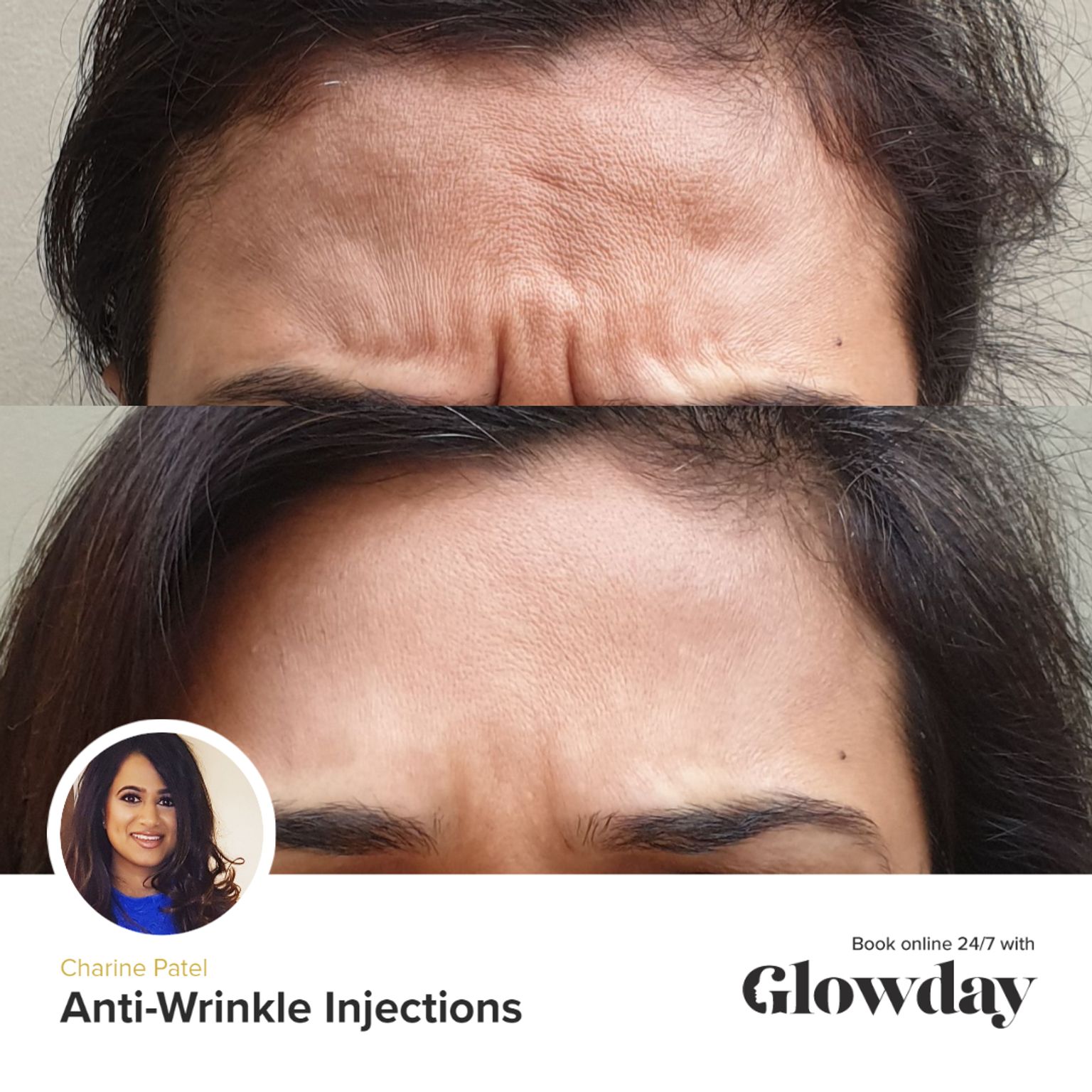 Another great before and after photo of frown lines being treated with Botox, by Charine Patel at Bisou Clinics

What about if I don’t want Botox? What else could help my frown lines?

Fillers are a great choice if you prefer to retain muscle movement. Hyaluronic acid, which is a substance found naturally in the body, is injected into the wrinkle to plump them out. The results are temporary, and you can expect to need a top up after around 6 – 12 months depending on how quickly your body breaks down the filler.

Dr Hannah Murphy is the lead clinician at Dermis Skin Aesthetics and says in the right circumstances fillers is an effective forehead treatment. Hannah says:

“I have used it a few times with certain clients. It is good for supporting deep forehead lines which won’t go with Botox or injecting directly in the lines.”

I don’t really want to inject my face, is there anything else I could do?

Not a fan of injectables? Then micro-needling may be for you. This is when a roller of micro-needles is rolled across your face causing tiny abrasions. This then stimulates your body to create new healthier, firmer skin, which in turn can reduce the appearance of wrinkles.

Fractional non ablative laser resurfacing is another non-invasive treatment that can reduce the appearance of frown lines. Lasers stimulate the production of new collagen and elastic fibres in the deep layers of the skin, reducing the appearance of wrinkles.

Move over Botox - It’s All About Fillers In Your Forehead!