Out with the old and in with the new.

A new phenomenon, where old lip fillers are being dissolved and replaced with newer, more natural looking fillers - dubbed the ‘lip switch’ - is the latest tweakment trend hitting aesthetic clinics across the UK.

Glowday, the UK’s largest booking site for cosmetic treatments, reports its practitioners are increasingly being asked to dissolve old lip fillers and switch their lip-look for a softer, more natural shape.

Glowday CEO, Hannah Russell, said “There’s been a 30% increase in people searching for lip filler compared to pre-lockdown*, and an element of ‘lip-switch’ could be driving this. Women still want lip fillers, but after spending hours looking at themselves on Zoom over lockdown, they want a softer, less plump look. In addition, newer lip filler products are more advanced and less likely to migrate (causing lumps and bumps in the wrong places) and clients are seeking these out.”

The lip-switch phenomenon is one Glowday practitioner Dr Steve Land, at Novellus Aesthetics in Newcastle, is also experiencing; “We’ve noticed a huge trend for what we are terming ‘filler reset’", comments Dr Land. "We’ve seen an 800% increase in people coming to us to dissolve old, overdone, poorly placed filler and then returning to have it redone better, more naturally and less ‘obvious.'"

Dr Lauren Hamilton, a cosmetic doctor and founder of Victor&Garth, agrees: “I’ve seen a few more people for Hyalase appointments to dissolve filler that’s been previously administered elsewhere. After a few months in lockdown, clients have realised that they don’t actually like the way that the filler was sitting and want something less plump. So, on the flip side, many people have used the time at home to realise that they don’t want over filled lips and appreciate what they already have."

And it appears working from home coupled with the ‘Zoom boom’ is driving demand for lip fillers and Botox, generally.

Claire Lavery, Nurse Prescriber at Claire Lavery Aesthetics in Leeds, says: "I’m busier than ever; there’s definitely been a recent boom. The number of patients I have seen since being back in clinic has increased by 250% compared to the same period last year. Those having Botox has increased by 300% compared to last year. Many of my patients, (new and regular) have said that after having been stuck at home during Covid, they decided to treat themselves once they could get treatments again."

Dr Steven Land has also been busy; “In the first month that we were open, we used the same amount of filler and toxin we normally would in three months. We’ve spoken to the patients about it and part of it comes from ‘Zoom face’ - staring at their own face in Zoom meetings and realising they needed a change, and partly from being able to hide any swelling or ‘non-existent’ lips behind a mask or by ‘self-isolating’ for a couple of weeks before they get things redone.’

Dr Lauren Hamilton concurs "I have seen an increase in people enquiring into dermal fillers and then following through with an appointment. I initially thought it was strange, as I’m used to seeing more people for Botox, but now there are a lot more dermal fillers each week. I asked a few of my patients and they told me that as they’re working from home, they can deal with the downtime and swelling a little easier."

Picture below shows a classic 'lip-switch' performed by Novellus Aesthetics. 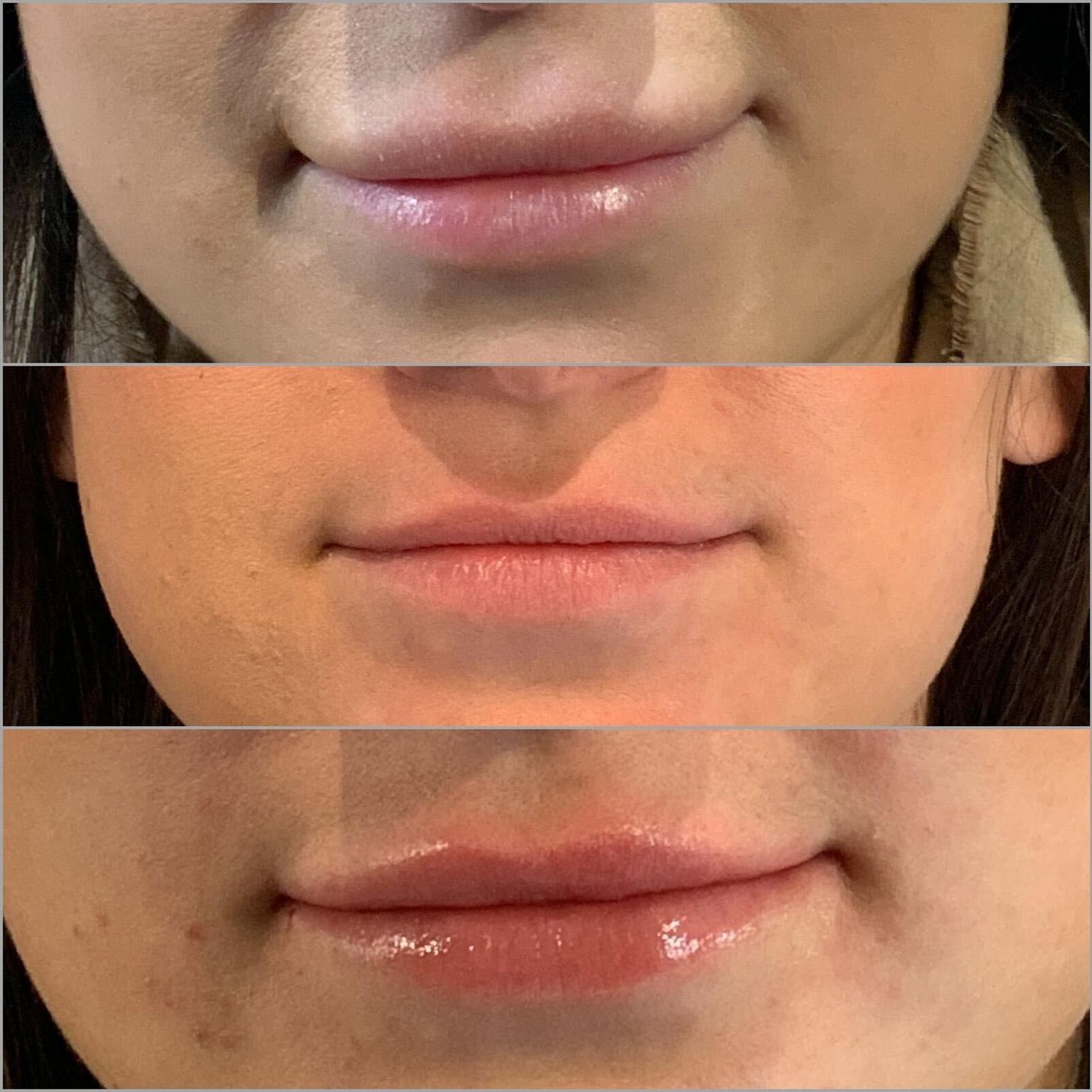