Over a quarter of UK women (27%) feel like lockdown has aged them, especially the 25-34 year olds, of which 44% of said this was the case. This perception of their appearance, a phenomenon names "Zoom face" has resulted in a boom in women seeking fillers and Botox when clinics reopen in April.

Why I Use Glowday to Book Safe Cosmetic Treatments

This new research comes from Glowday, heralded as the ‘Rightmove or Airbnb of aesthetics’, Glowday is the UK’s first marketplace where consumers can find, review and book medically-qualified practitioners for non-surgical cosmetic treatments such as fillers, Botox, chemical peels, microneedling, and laser hair removal. It verifies all practitioners are registered with a medical body and are insured before signing them up to the site. 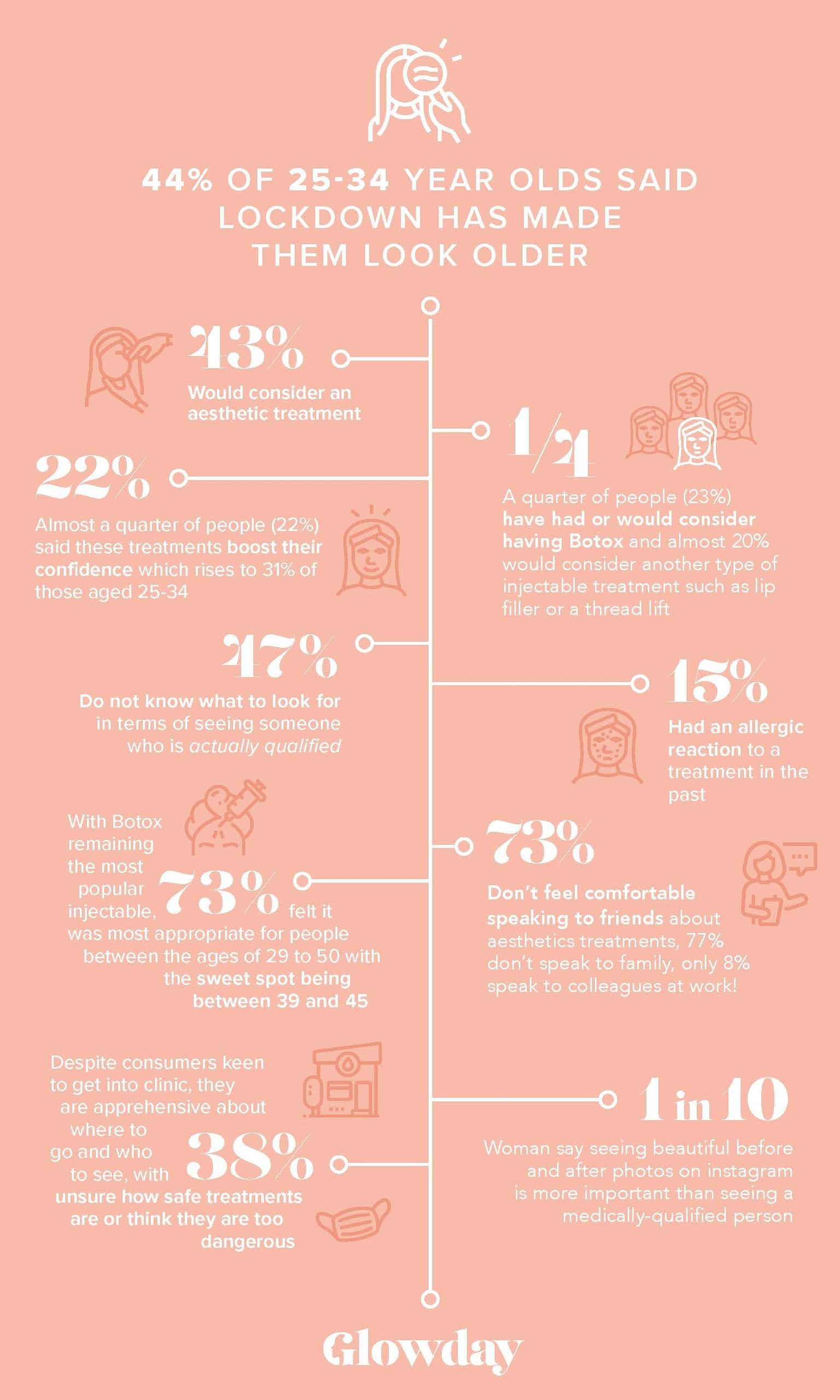 The research revealed that a quarter of people (23%) have had or would consider having Botox and almost 20% would consider another type of injectable treatment such as lip filler or a thread lift. As well as injectables, people are also keen to have treatments like microneedling (20%), chemical peels (23%) and laser hair removal (43%).

As for why people are turning to aesthetics, almost a quarter of people surveyed (22%) said having these treatments had boosted their confidence which rises to 31% of consumers aged 25-34. With Botox remaining the most popular injectable, 73% felt it was most appropriate for people between the ages of 29 to 50 with the sweet spot being between 39 and 45.

The survey revealed that 73% wouldn’t feel comfortable speaking to friends, or asking them for advice about aesthetics treatments, 77% wouldn’t speak to family, and only 8% said they’d speak to colleagues at work!

Despite consumers keen to get into clinic, the findings also highlighted a sense of apprehension around where to go and who to see, with 38% unsure how safe treatments were, 34% thinking treatments are too dangerous and around 1 in 5 (21%) said they were too nervous to have it or them done.

By providing a safe and regulated site for people to feel confident when booking their treatments, Glowday hopes the aesthetics industry more transparent. Clearly of great importance when the research revealed that a huge 47% of people said that they did not know what to look out for in terms of seeing someone who is actually qualified and 26% said they’d be unsure. Only 28% said they felt they would know what to look for.

Glowday CEO, Hannah Russell, said; “There is nothing wrong with women wanting a confidence boost and to see fresher versions of themselves, but now is not the time to rush to bogus unqualified providers. This is why Glowday exists, to give customers a one-stop shop that’s a trusted and reliable source, we only allow doctors, nurses and dentists to list. We have already welcomed over 200 clinics onto the platform.”

When asked what people consider to be the most important things, 1 in 10 rated seeing ‘lots of beautiful before and afters on Instagram above cleanliness and that a treatment has to be done by a doctor or qualified medic.

“The risk of not going to a medic is huge for when things go wrong, and I think people feel it wouldn’t happen to them but 15% of the people in our research had had an allergic reaction to a treatment in the past, so if that was you, wouldn’t you want someone there who could administer the antidote? This can’t be done unless you’re medically trained,” explains Glowday’s Hannah.

Only featuring medicals and professionals that are certified, Glowday is the guaranteed stamp of approval consumers want and need. Eliminating the need to ask for certification, it hopes to build the industry’s reputation as well as preventing botch jobs and unethical practices.

Hannah continued: “I’m confident that Glowday will be a beacon of light to the industry which is currently a dangerous, unregulated market. At present, £3bn is spent each year on anti-wrinkle injections and dermal fillers – these treatments equate to almost 80% of all aesthetic treatments. Current industry standard allows for almost anyone to be able to inject fillers into someone else without consequence and sadly, the real victims are the individuals who as a result end up with botched procedures. These are individuals who are already likely to be vulnerable both financially and emotionally, therefore Glowday hopes to give all consumers a safety net.”

Why I Use Glowday to Book Safe Cosmetic Treatments