Couples Who Tweak Together Stay Together!

What are you buying your boyfriend, husband, partner for Christmas this year? Socks? Aftershave? Golf balls again? Or perhaps a bit of Botox and filler....

If you're going to have a bit of Botox with your partner this Christmas, make sure you find someone who is qualified and trusted. Search Glowday right here to find someone near you.

Aesthetic practitioners are seeing an increase in couples choosing to have cosmetic treatments together! How cute.

This weekend the Telegraph featured Nicola and Ian Gold, a pair of 'tweakers' who run a celebrity management agency and have been enjoying having Botox and fillers together since they were married eight years ago. Ian told the Telegraph: "From the moment we met, we were both very open about what we have done. A lot of our clients have tweakments and we’re constantly at events, so we want to look the part. We both like doing things to maintain a better version of ourselves and we’re both as keen as each other to keep a youthful look. Plus, I can’t have my wife looking too much younger than me!"

Ian has been having Botox from 2005 to sort out his frown lines and Nicole, 49, has had both tear through fillers and Botox. 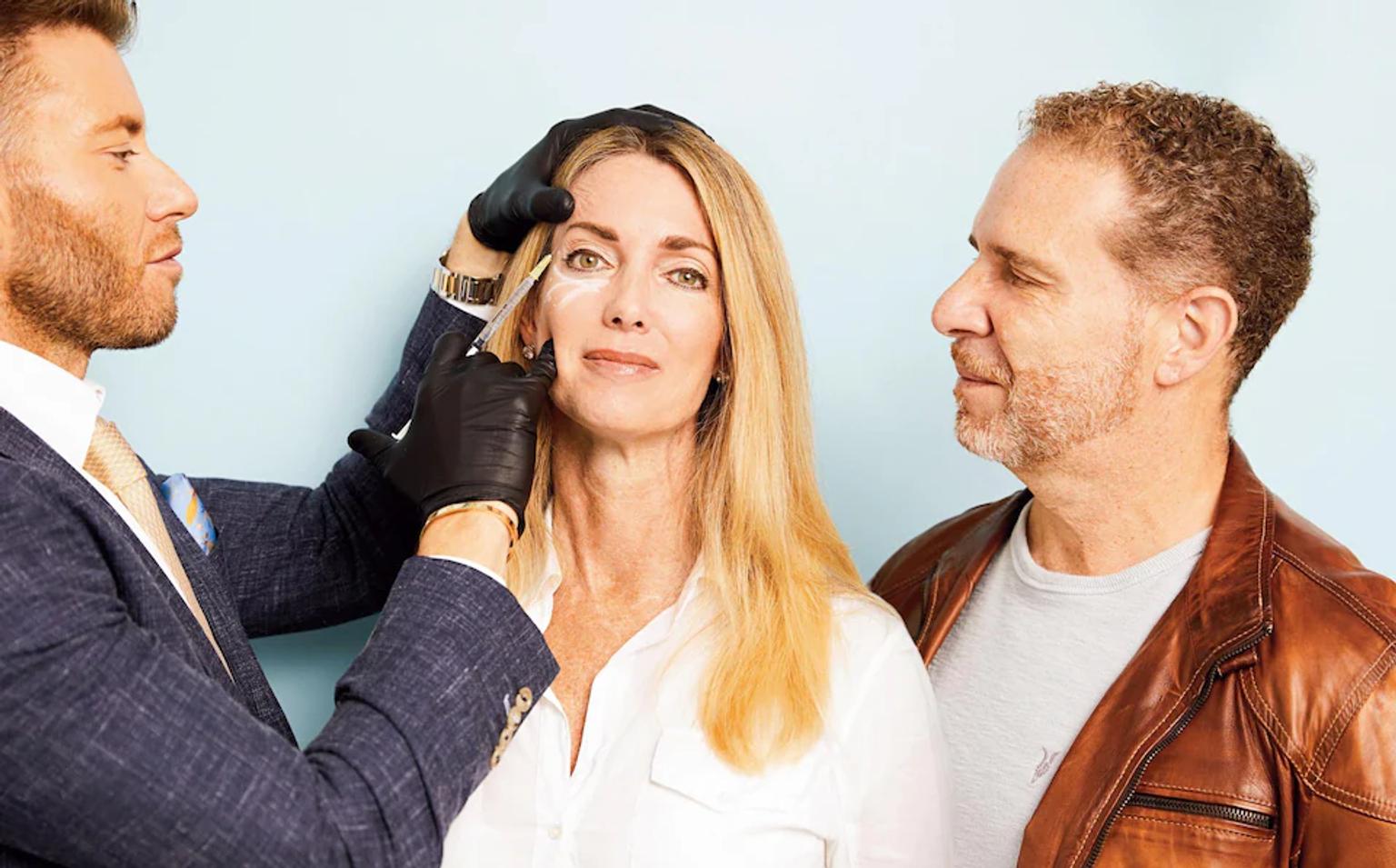 ‘From the moment we met we were both very open about what we have done,' say Nicole and Ian Gold, a pair of 'tweakers' CREDIT: Leon Foggitt and The Telegraph

Why are more couples choosing to have non-surgical aesthetic treatments?

According to Glowday practitioner Lauren Jenkins from LJ Aesthetics it's all down to the fellas liking what they see! She told Glowday: "I treat three couples. Once the men have seen the results they book in too!"

Indeed, the demand for aesthetic treatments from men is on the rise, and it might just be because women are encouraging their partners to embrace them. Cheryl Cain from The Good Skin Guru Aesthetics Clinic says: "I have two couples who come together, I think both women convinced their partners to come along!"

In fact it seems that men being nagged to sort out their crows feet is a common occurrence Dr Malaika Smith from Dr Malaika Clinics thinks so, she told Glowday: "I have recently had three couples, but with two of them it was definitely the wives who wanted the husbands to have the treatment. When I was doing the consultation with one of the husbands and I asked him what he'd like me to help with he jokingly replied:  “I have no idea, you’ll have to ask her!" Luckily it was someone that I have known for many years, so I knew it was a joke, but I still did my due diligence as a medic, friend or not, it’s a medical procedure at the end of the day, so it did then mean a longer conversation with him during the consent process to ensure that he was happy to proceed!"

Are women hypocrites? Wouldn't we be furious if our husbands suggested we have a cosmetic treatment? While I'm no psychologist, I would hazard a guess most women would feel upset, conscious and insecure if their partner suggested a bit of Botox. On the contrary, I think men (not all of them) tend to feel rather pleased if their partner suggests a treatment to fix a flaw. And hey, if we make the booking for them too, even better! 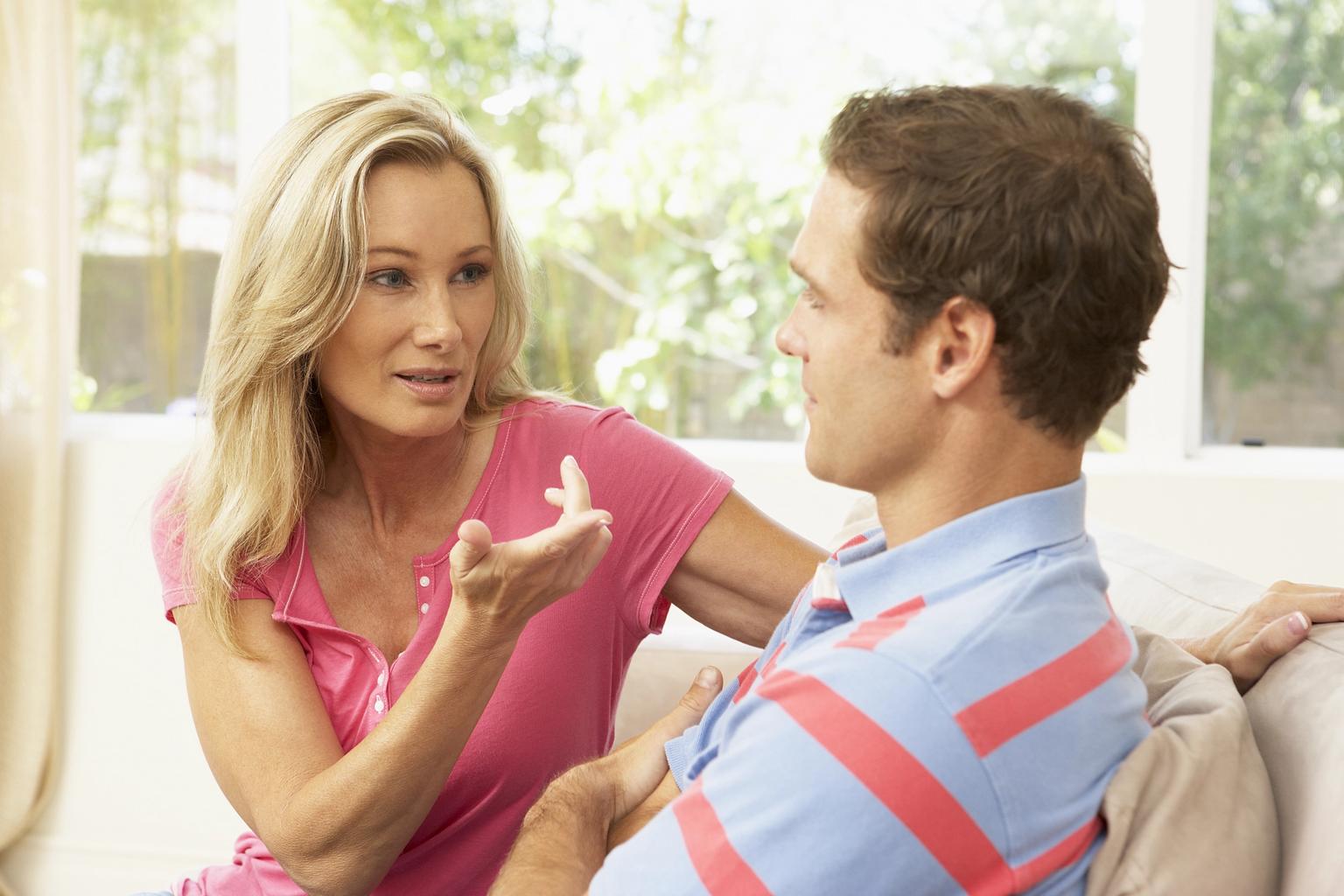 Babe, have you noticed your jangly jowls? I really think we ought to do something about it now.

What treatments are couples having?

By far the most requested treatment is antiaging injections like Botox for both men and women. This makes sense given the lines and wrinkles that men experience tend to be more pronounced and 'obvious'. But if you're thinking of treating your partner to some aesthetics treatments for Christmas and they're a little cautious or concerned about the stigma of having a bit of Brotox or filler, you could suggest a consultation for a skin treatment like Profhilo.

Unlike Dermal Fillers, Profhilo is an anti-ageing treatment that does not volumise the area that has been injected into but boosts hydration reducing the appearance of fine lines, while helping the overall tone and texture of the skin itself. This injectable treatment has a very high concentration of Hyaluronic acid which is injected into the skin through five different key points on each side of the face, and it works amazingly for men as well as women!

Does Profhilo for Men Work?

Yep! If you have skin Profhilo works. It's a great treatment to rejuvenate dull, tried and ageing skin and does a good job at increasing firmness and elasticity - it plumps the skin which in turn reduces fine lines and wrinkles! It can also help to improve the texture, hydration and tone of your skin.

Will more couples be getting treatments together?

Glowday reckons that as aesthetic treatments become further normalised, the trend for couples tweaking together will increase. Twenty years ago men would have been embarrassed to even use moisturiser, now the likes of Boots and Superdrug dedicate significant shelf space to male skin products and men are embracing injectables more than ever, so couples tweakments could become a shared interest sooner than we think. It's something that Dr Yash Utterwar from Dr Yash Aesthetics agrees with, she told Glowday: "I've got five couples and three have been coming to me for over three years, yes the trend is coming."

Well, it makes a change from the cinema doesn't it!

If you're interested in booking a couples cosmetic treatment, why not have a look here and see the amazing clinics in your area.