10 Years Younger in 10 Days has always been one of those programmes that felt too controversial to be on TV – well British TV anyway. A show that focuses on making significant physical changes to a person’s appearance by using dental cosmetics and non-surgical aesthetic treatments almost feels too out of reach and indulgent for a British audience. I mean we’re a society who is still embarrassed to admit to having any “work done”, despite knowing full well that none of our friends and family truly believe the sudden disappearance of our crow’s feet are the result of clever makeup and a good sleep.

Everything You Need to Know About Tear Trough Filler

However, with the rise in demand for non-surgical cosmetic procedures, and therefore more accessible and affordable treatments, the idea of turning back the clock 10 years suddenly feels very achievable, and the procedures featured on the show can be found at most reputable local clinics. What’s also refreshing about this show is that despite its light-hearted title; the welfare of the men and women featured is a priority and hammers home the message that you should only go to appropriately qualified practitioners for treatments.

What’s even more important, is the programme doesn’t set out to drastically change the essence of those who take part, but works with them to restore them to their former selves and to find the person they once were. They look at the whole person and repair the confidence from within – not just rely on the external aesthetics for a quick fix.

And so, to mark the magnificent return of this uplifting programme to our screens, here’s a recap of some of the best bits of the last season, and how the wonderful women and men who took part achieved their great new looks and gained some newfound confidence. (No, you’re crying)!

Amanda is a police officer whose mental health suffered terribly after she was assaulted whilst on duty. Although her average age only came back 5 years over her actual age (she’s 41 and people pinned her as being 46) Amanda was severely lacking in confidence and had no joy in her life. You could see Amanda’s feelings of sadness almost like a dull force field around her – from the way she dressed to the pallor of her skin and the style of her hair – everything was a bit limp and drab. It was as if she had just given up.

Enter stage left Cherry Healey - journalist, TV presenter and every woman’s best friend - who not only restores Amanda’s physical looks but also helps put back together her fragile state of mind and finally gives her the confidence to start truly living again. 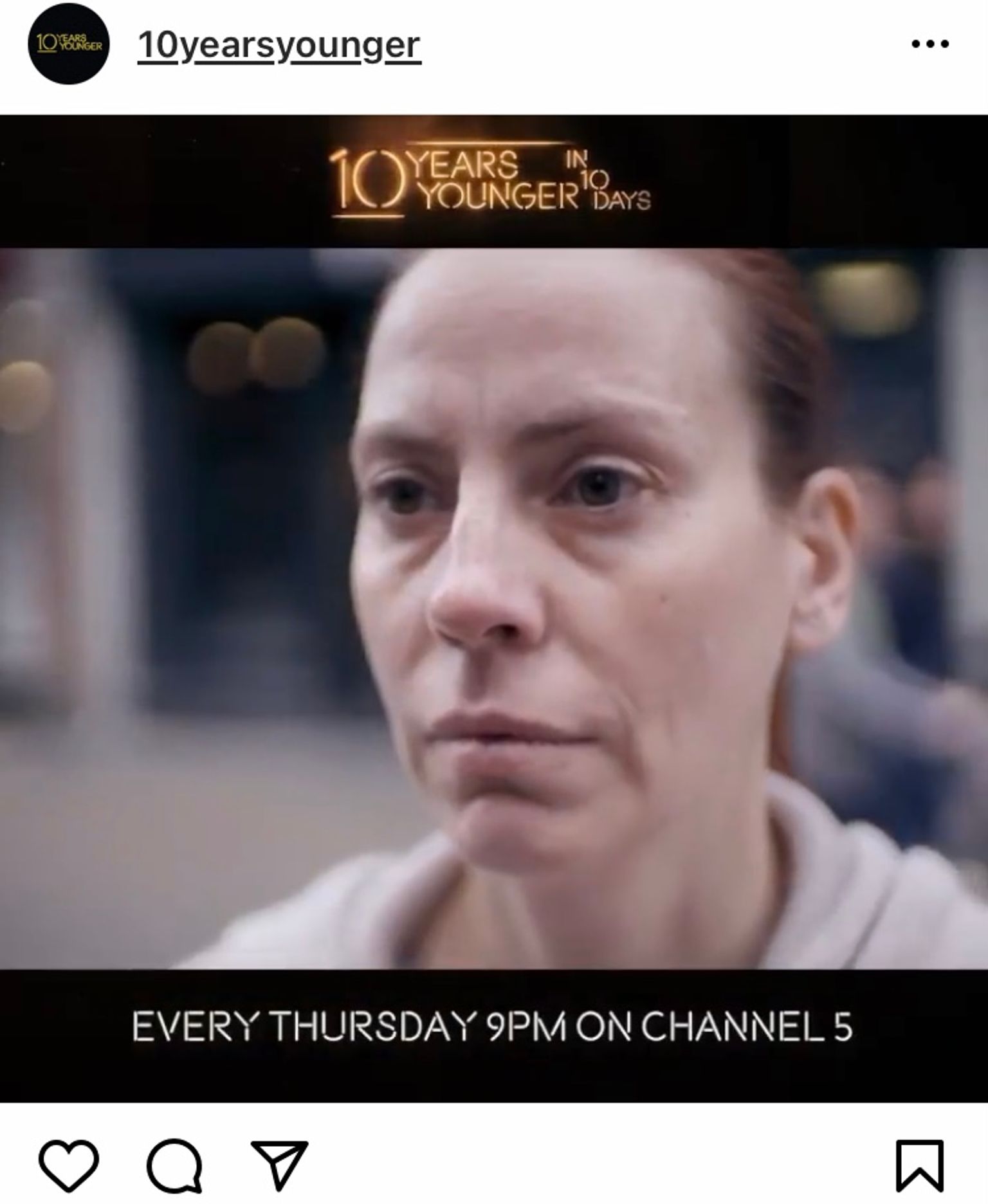 Cosmetic dentistry: - a good, deep clean and a new bridge plus some porcelain veneers.

Face: - Anti-wrinkle injections (best known colloquially as Botox - though that's just one of several brands) around the eyes and forehead. Although not referenced, she also looks to have had tear trough fillers.

Top tip: - a quick way to give yourself an instant eye lift is to properly shape and colour your eyebrows! 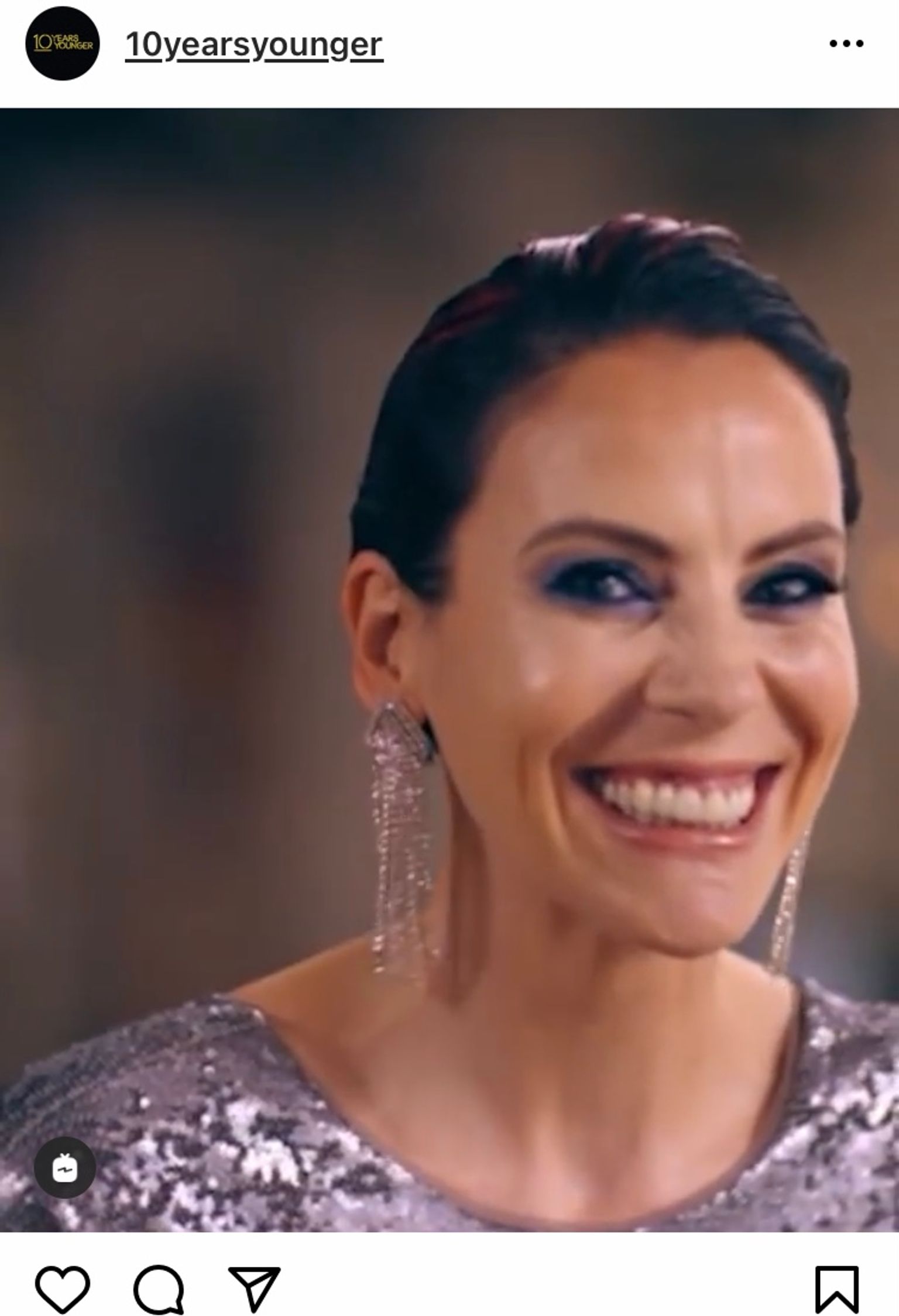 It’s refreshing when beauty programmes feature men in the line-up. Okay, we could argue that men get enough screen time as it is, but feminism is about inclusivity and this programme has this in spades. Who says it's only women who deserve a helping hand when it comes to improving confidence and looks? Meet Tom, a Hell’s Angel type biker, who wants to simply wake up in the morning and feel happy with what he sees - and give his girlfriend a kiss on the cheek without his biker beard irritating her. Tom’s passion for life is his motorbike and he prides himself in his Viking-esque beard. However, along the way he seems to have lost his edge, with some observing that he looked like a “couch potato. Along comes Cherry, with her wonderfully refreshing honesty around her love of all non-surgical tweakments, to navigate Tom away from his current highway to hair and beauty hell and towards pastures new.

(Spoiler alert! Watch until the end for Tom’s girlfriend’s reaction. Safe to say she found him hotter than hades). 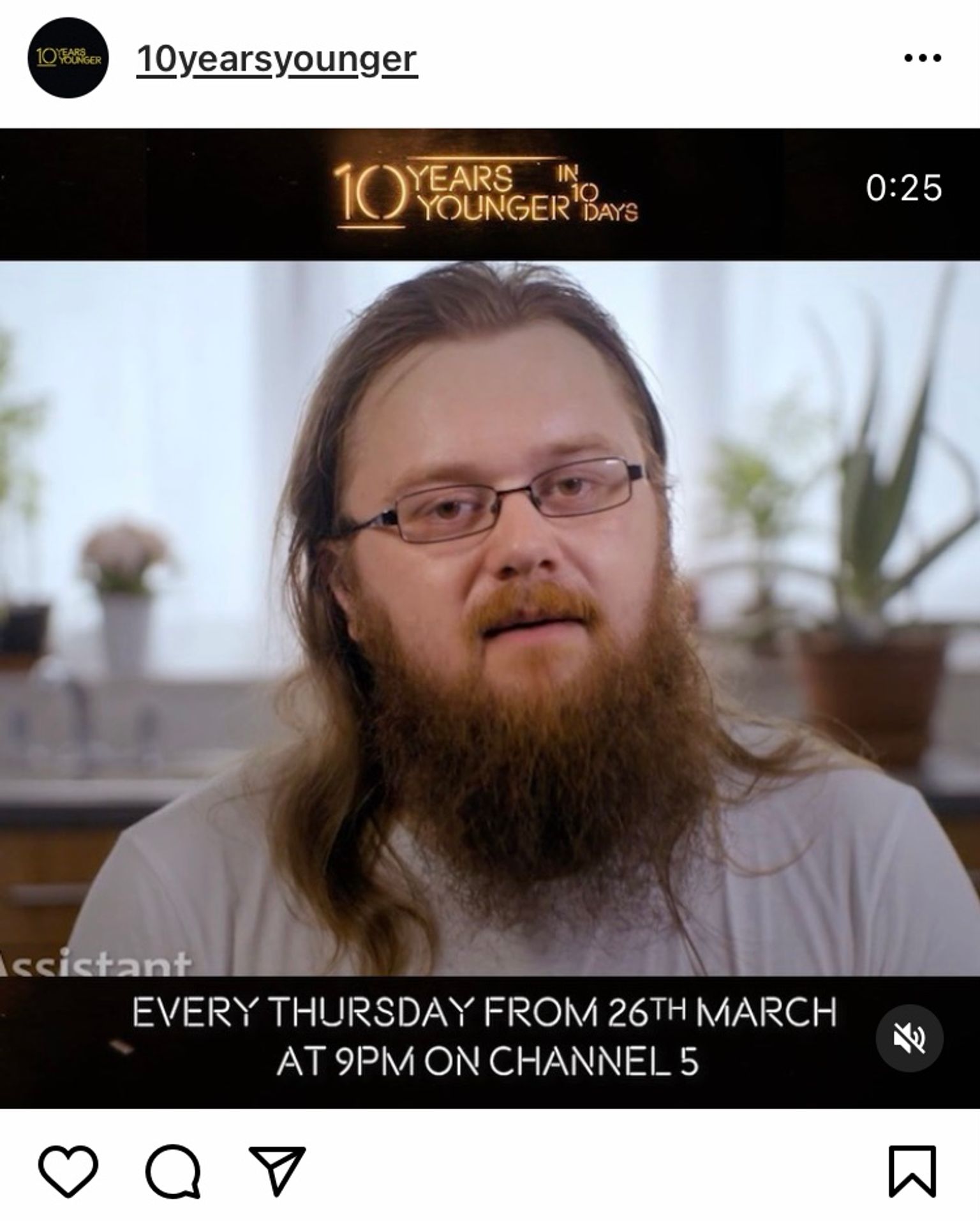 Makeup (yes really): Bit of brow gel and some concealer helped turn back the years for Tom.

Top tip: Only dentists are legally able to use whitening/bleaching treatments. If you can’t afford it (prices start around £300) then ask your dentist for advice on whitening toothpaste and strips, and remember to brush and floss regularly.

Don't miss Tom's transformation. You can watch it in its entirety on catch up now. 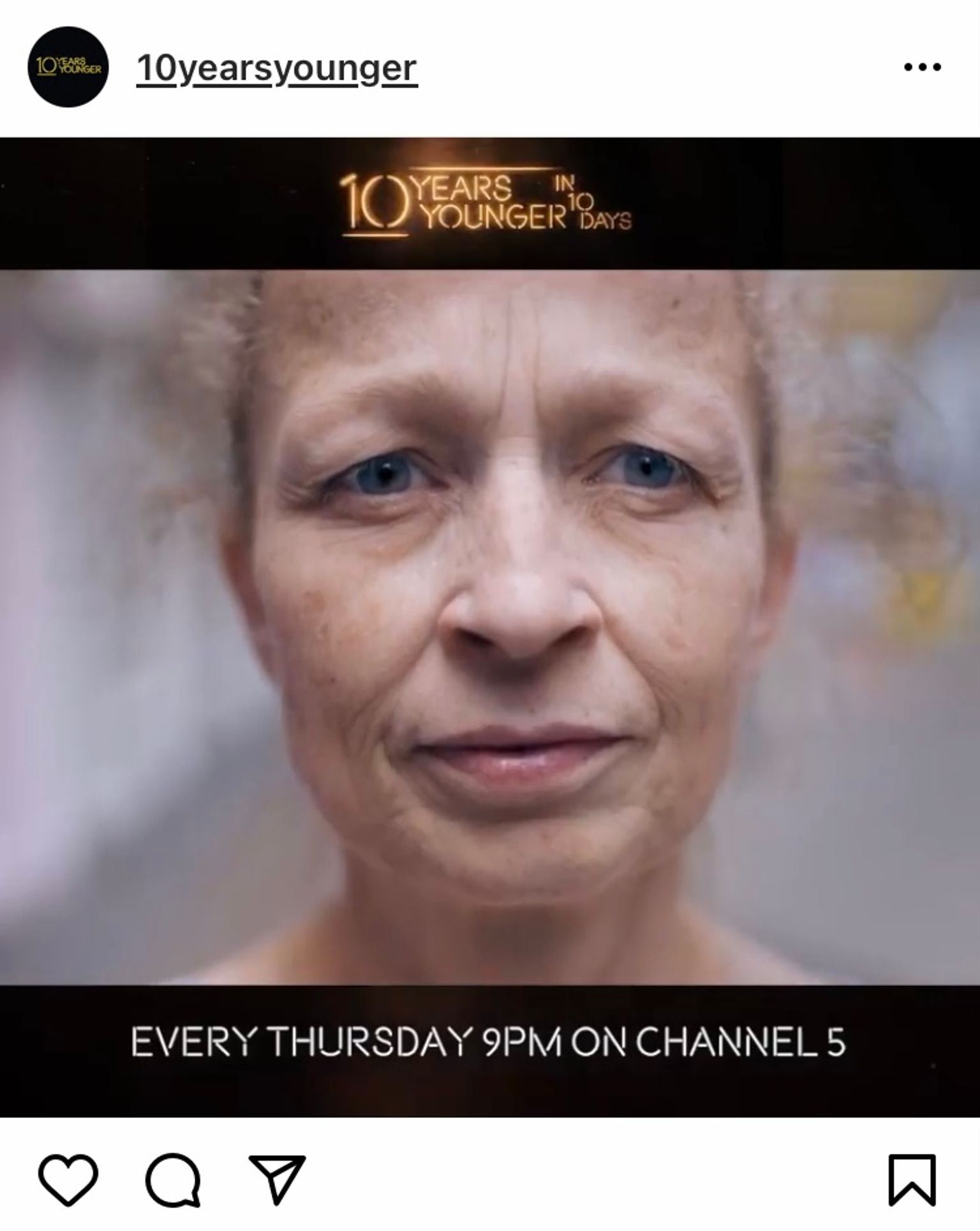 Cancer survivor Lyndsay’s body is already amazing having beaten bowel cancer. However, after the surgery and treatment she put her energy into raising her young daughter and lost her confidence and sense of self in the process. As Lyndsay says, now it’s her time and she embarks on a journey that not only fixes the outside but helps her to heal from the inside too. Like many people, Lyndsay reached a stage where she felt so overwhelmed by the signs of ageing in her face that she just ignored it, hoping it would go away. Just a few small fillers and a bit of anti-wrinkle treatment – plus a good skincare routine – immediately fixed her issues and plumped up her sagging skin. Her cancer treatment and subsequent poor diet had also ravaged her teeth - she had literally lost her smile – and her restorative treatment also involved a good set of dentures, which opened her smile and provided more structure to her face to fill out her cheeks too.

Top tip: Only registered doctors, nurses and dentists should administer anti-wrinkle treatments. They are the only people who can legally obtain it and are medically trained to understand the physiology of muscles and arteries in the face, meaning they can give you the results you’re after and act quickly if something goes awry.

To see Lyndsay's transformation, you can watch the episode in full on catch up.

We'll be tuning in this Thursday to get our first dose of the second season. What about you? In the meantime, if you're interested in learning about the different types of non-surgical aesthetic treatments, check out our handy guides, packed full of need-to-know info.

Glowday lists hundreds of medically qualified aesthetic practitioners, so you can be sure you're in safe hands when booking and attending a non-surgical treatment.

Everything You Need to Know About Tear Trough Filler