My Friends Tell Me It's Like Having 'The Old Billy' Back

It’s easy for people who feel confident and happy in their own skin to dismiss aesthetic treatments such as fillers and wrinkle relaxing as frivolous and vain. But for Billy, a photographer from London, non-surgical face treatments have been a powerful tool used in his recovery from a brain tumour.

Find a medically-qualified practitioner on glowday.com

An Eye-Deal Solution For Droopy Lids!

Glowday spoke to Billy and his aesthetics practitioner Kelsey Bailey from KB Aesthetics London, to learn about Billy’s journey and how aesthetics treatments have helped him feel like his old self again.

Hi Billy, tell us a little about what's happened to you.

Three years ago I had surgery to remove a non-cancerous tumour from my brain stem. The operation was a success but my facial nerves were badly damaged. A year later, I had nerve transfer surgery to get some movement back in my face which really helped but my face was still asymmetrical in a few areas. A year on I had one more round of plastic surgery but I still could not get any closure on my issues with my face. My lips were a funny shape and I had a crease above my mouth, which I was very insecure about.

What did you do next?

After doing my research I came across Glowday, which is where I found Kelsey. I contacted Kelsey and she was very happy to have a chat with me. I felt at ease right away as she told me she also worked as a nurse. Knowing that she had medical experience was the deciding factor for me as I knew I was going to someone who I could trust and more importantly cared about my wellbeing rather than just making a quick buck. 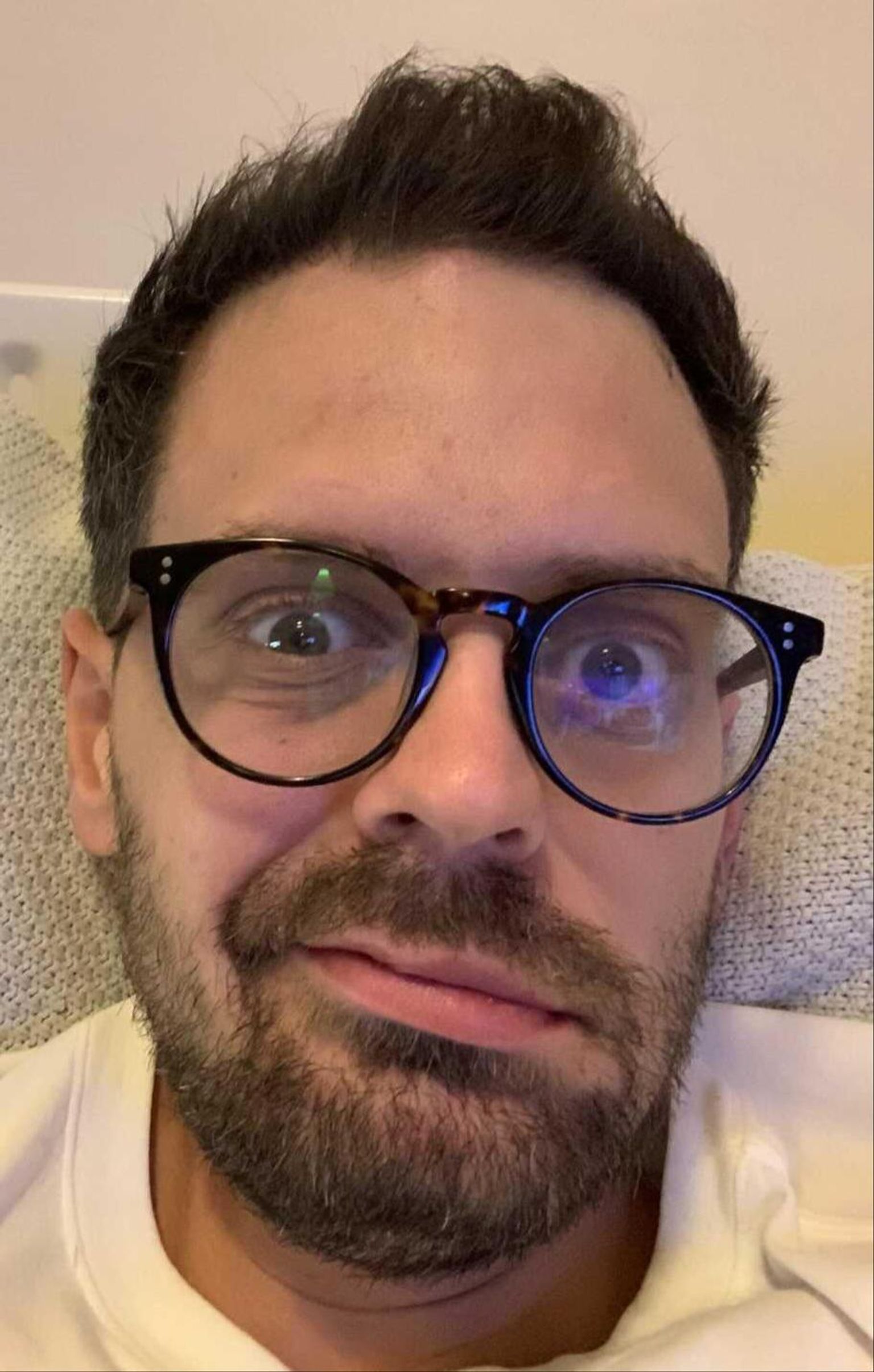 Billy before his surgery.

Kelsey, what were your first thoughts?

Every now and then I will speak to potential patients who want help with a treatment that is a little different from a standard treatment. I spoke to Billy on the phone in-depth at first and we had a pre-consultation of sorts, before he came for his face-to-face consultation. This is slightly unusual, but I later understood that Billy wanted to prepare me as he was expecting another ‘no’ if he just turned up to his appointment.

What made you proceed?

It’s strange - the nurse instinct in me kicked in. I thought, actually, what can I do, safely, to help this patient? It’s easier (and understandable) for some practitioners to say no to difficult cases, because it is different and it is scary. However, the medic in me saw a person who wanted help and I thought I could.

It was not easy though. I knew that firstly I had to gather all the information I could about Billy’s previous treatments to help me establish if hyaluronic acid filler would be safe and even worth it to be honest. This led to me contacting and liaising with Billy’s facial surgery consultant. After explaining exactly what I was intending to do to help with Billy’s symmetry, we got a big - but cautious - thumbs up!

Were you apprehensive because of how complex Billy’s case is?

Yes. Due to Billy’s facial reconstruction on the left side, Billy’s anatomy is vastly different to what we call normal. In aesthetics it is SO important to understand facial anatomy including arteries, fat pads and muscles - but also to recognise that everyone is different. While most times, in any procedure I undertake with a patient, I can look at a facial structure and accurately identify where vessels will be, in Billy’s case it was almost impossible to predict anything on his left side due to the nature of his facial reconstruction.

What goals were you trying to achieve? What was bothering Billy?

What bothered Billy the most was the indentation lines caused by the nerve used to anchor his left sided facial palsy upwards. He thought it made him look asymmetrical and unlike his old self. That coupled with his lower lip, which was uneven and scarred due to the fat needed to reconstruct the lip, bothered him the most.

What treatments did you undertake?

I had to thoroughly assess Billy’s face in detail before we decided together on any treatments. It was also important I kept in mind that Billy wants to remain true to his original facial anatomy, he doesn’t want to look like somebody else or for it to be obvious that he has had aesthetic treatments, the skill would be in the subtleness.

Because of the fat replacement in Billy’s bottom lip, there is unevenness, with a visible scar through the lip. On inspection I could also see the lip artery running right over the middle lower lip tubercle making it very superficial and easy to see - great! There was still a risk of vascular occlusion, but I could clearly see the areas I needed to avoid.

With Billy’s nerve anchor on the left side (a nerve from Billy’s leg was used to pull the side of his face upwards), this was difficult to feel under the cheek, however the scar this created was where I was going to start.

We decided this would be a slow journey together and so far we have treated Billy’s lower lip, cheeks (to help with facial volume), nasolabial folds and scar tissue.

We still have a way to go but so far so good and it really does prove that little tweaks can dramatically make you feel good and grow in confidence. I am just happy I could help Billy and look forward to continuing on our journey together. 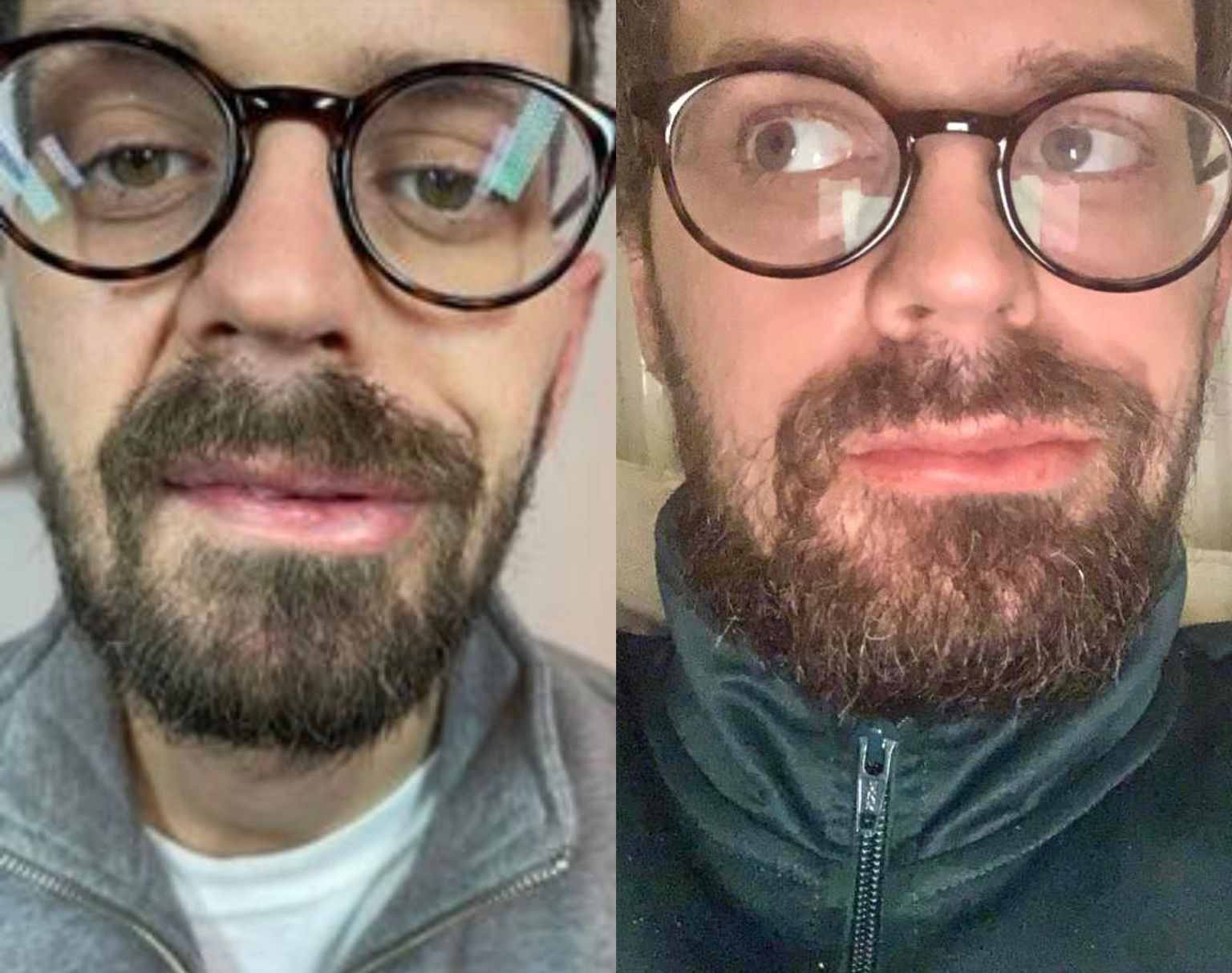 Billy's aesthetics journey with Kelsey continues and he's feeling over the moon with the results!

Billy, how have you found the experience?

It was fantastic that Kelsey spoke to my plastic surgeon who agreed with Kelsey’s plan of action. I initially spent an hour with Kelsey and the results were clear to see right away. As it was my first time with filler, we agreed I’d return some weeks later and that’s when Kelsey worked on more areas of my face, including the lip creases that bothered me.

Do you feel the treatments have made a difference to how you feel about yourself?

I am over-the-moon with the results and Kelsey has achieved a look I never thought was possible. I feel like I’m back to my old self before my brain surgery three years ago. My friends tell me it’s like having the “old Billy” back again. My confidence is high and my insecurities are a thing of the past.

Do you have any advice to other people who may be in a similar situation to you?

Yes. I’ve learned that dermal filler is not just for people who want to enhance their facial features. I would strongly recommend this treatment to anyone who is seeking help for Bell’s Palsy or any facial asymmetries that bother them. And if Kelsey can be your nurse, then that’s just the icing on the cake.

What an incredible and inspiring story and such a wonderful example of the power of aesthetic treatments. Thanks to Billy and Kelsey for sharing their experience and Glowday wishes Billy all the love as he continues his journey!

If you find yourself in a similar situation to Billy and think aesthetic treatments may be able to help you, you can find a medically-qualified practitioner and book in for consultation directly on Glowday.

An Eye-Deal Solution For Droopy Lids!