Lady Gaga is everywhere! What a woman. We're a bit obsessed with her. We're still not over her and Bradley to be honest - please can they get married Irl? House of Gucci is going down a storm and we like nothing better than to stare at her face on the big cinema screen. There is no doubt there's been some changes over the years, so we asked a few of the UK's top aesthetic experts for their take on what Gaga has had done.

How Has Gaga's Face Changed? 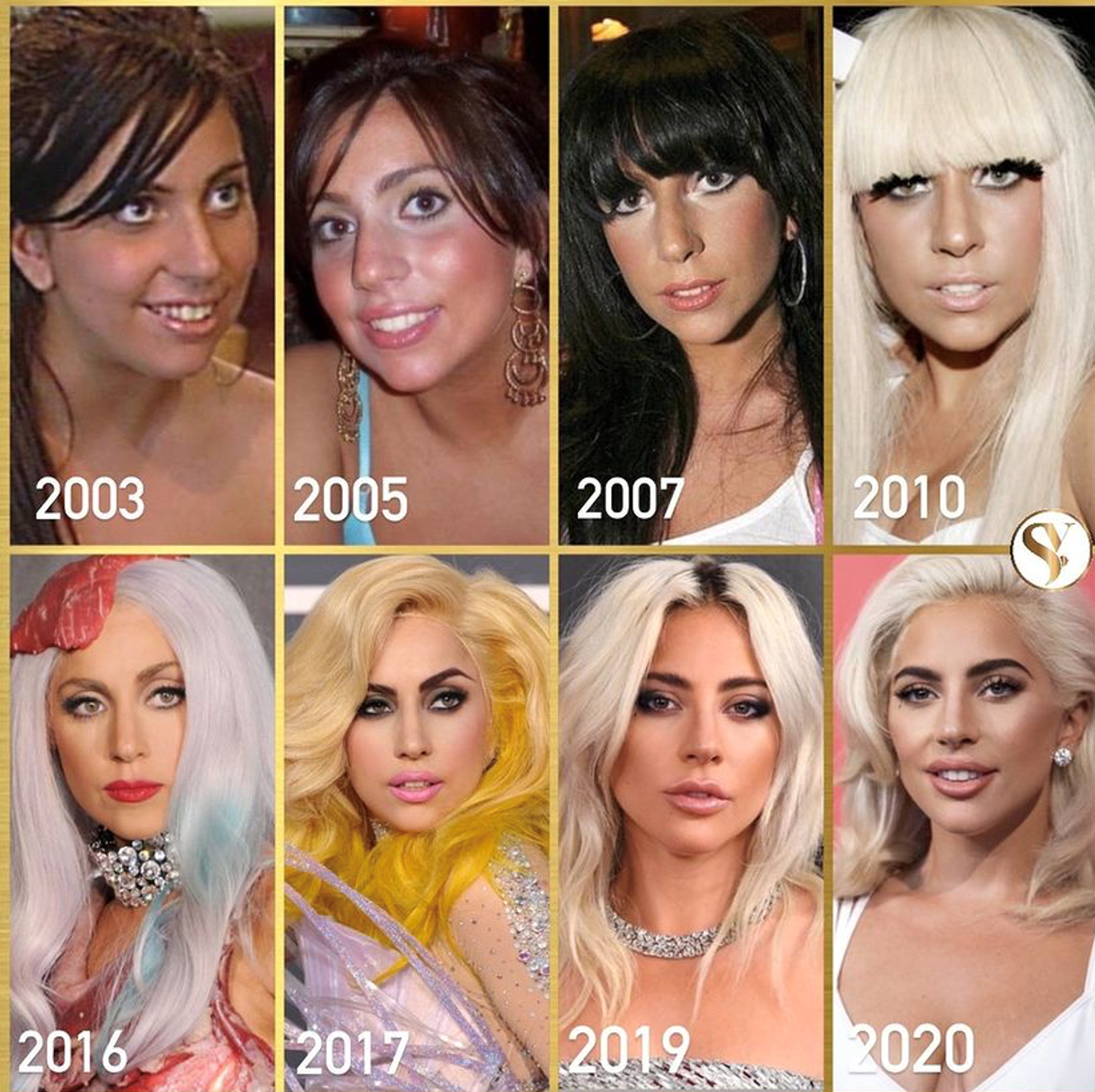 The many faces of the amazing Lady Gaga.

There is no denying that Lady Gaga's features have transformed over the years and indeed while she's less forthcoming in recent years about the work she's had, in 2013 in an interview on The Howard Stern Show, Lady Gaga spoke candidly about her addiction to fillers: “I’ve never had any work-work done, but I went through a phase when I was smoking pot when I was really obsessed with getting facial injections. I’m telling you, I wasn’t exactly in the best frame of mind, and I would smoke a bunch of joints and have some drinks and I would be like, ‘Oh, let’s go see my girl’ and we would drive to this strip mall and I would get shot up with a bunch of whatever, Juvederm, and then leave."

It's reported that when Gaga starred in the film A Star is Born, Bradley Cooper convinced Lady Gaga to ditch the use of cosmetics during their shoots.

She shared the experience with The LA Times, saying: “I remember very, very well, I walked down the stairs from my house before we filmed the screen test for A Star Is Born, and Bradley had a make-up wipe in his hand and he put his hand on my face and he went like this, and there was make-up, but just a little bit and he said, ‘I want no make-up on your face’.”

Gaga is a bit of a contradiction. Happy to have MILLIONS of people watch her make-up free, raw, real, yet also a fierce woman whose image is very much part of brand Gaga, she goes for it - like really goes extra - on every occasion. However, Gaga doesn't do it for anyone else, she knows who she is and she experiments, she plays, she pushes the boundaries and she's confident being her - whatever version of her she is. 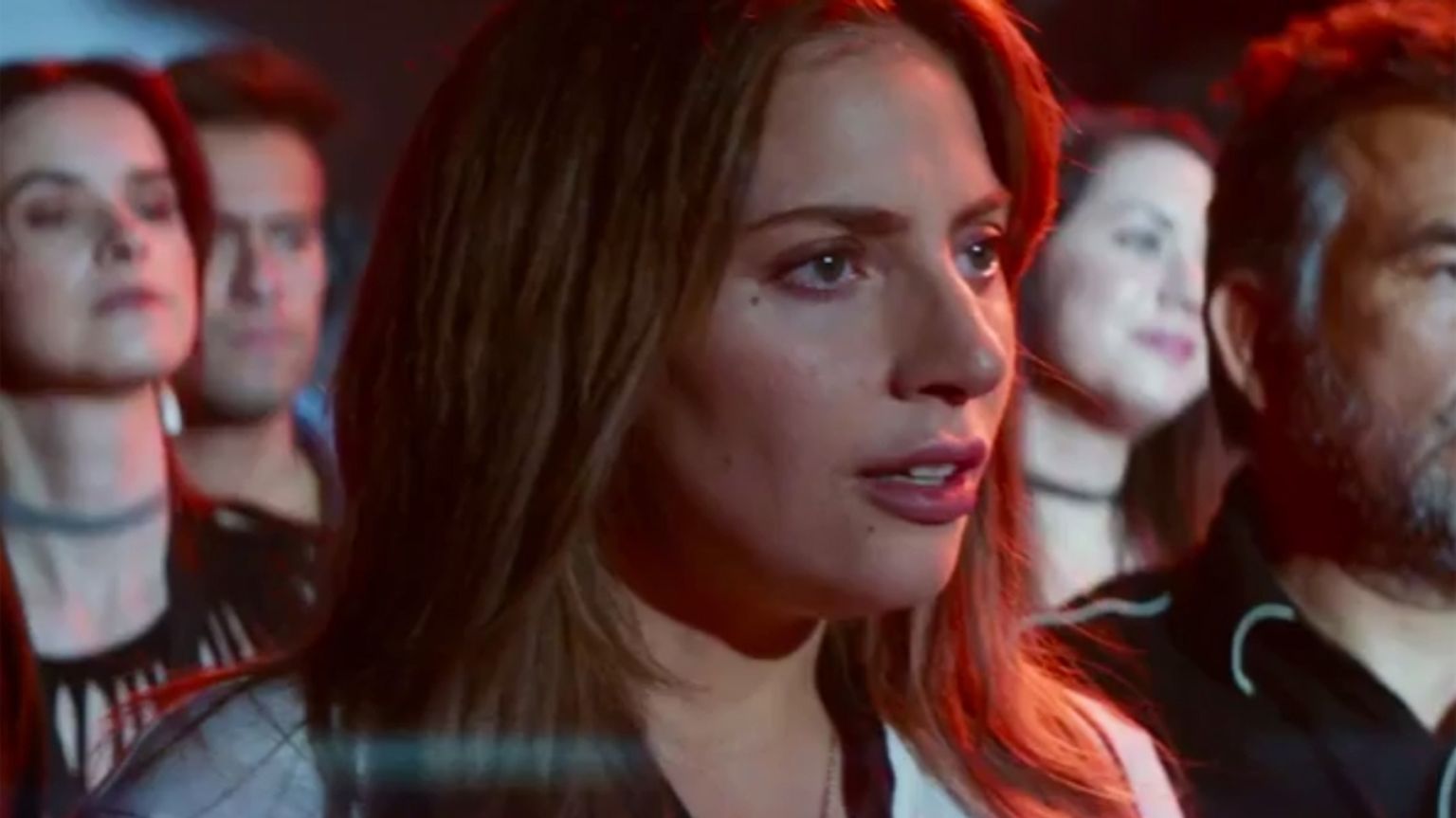 She Was Born That Way

Gaga has spoken openly about being bullied because of her nose when she was younger, but she's never admitted to getting plastic surgery for her nose. On the contrary, in 2009, she said: "Before my first single ever came out, it was suggested I get a nose job, but I said, ‘No.’ I love my Italian nose. If people wanted me to look like a sexpot, I would look like the opposite.”

Shelley Folkes, nurse practitioner at The Glow Clinic Hereford isn't so sure, Shelley says: "Having had a look over the years I think Lady Gaga has had a nose job, which may have been surgical but could have been a non surgical rhinoplasty, the tip is lifted and over all it looks narrower.

The Edge of Glory - What's She Had Done?

While Glowday's experts aren't entirely sure if she's since had work on her nose there is some consensus that she's certainly tried other non surgical cosmetic treatments. Dr Megan McCallum, lead aesthetics clinician at Stepps Ahead Dental care says: "Gaga is doing it right, what a beauty! I think she may have dipped her toe (or should I say face?) into the world of Botox and fillers! Plumper lips, more chiselled features, dermal filler in the lips & possibly the cheeks, chin and tear troughs. Her brows sit higher, no wrinkles in sight and limited movement in interviews makes me believe Botox is commonplace here. Maybe even in her jaws to compliment the filler. I can't make up my mind about her nose..."

Too Much Poker Face?

Advanced Clinical Nurse Practitioner, Susan Langridge suspects Lady Gaga, as well as having cheek, chin and lip filler has also had some work on her jaw. Susan says: You will see she has a more refined jawline and the chin has been augmented to make her face look longer. Her lips are fuller, giving her a nice pout." Dr Sara Maki from Dr Sara Maki Aesthetics agrees, she said: "Lady Gaga's lips appear more voluminous and defined, and I think she's achieved this with lip fillers." The shape of her face overall is more balanced in the later pictures, possibly due to cheek filler as her jaw and chin were already well defined." 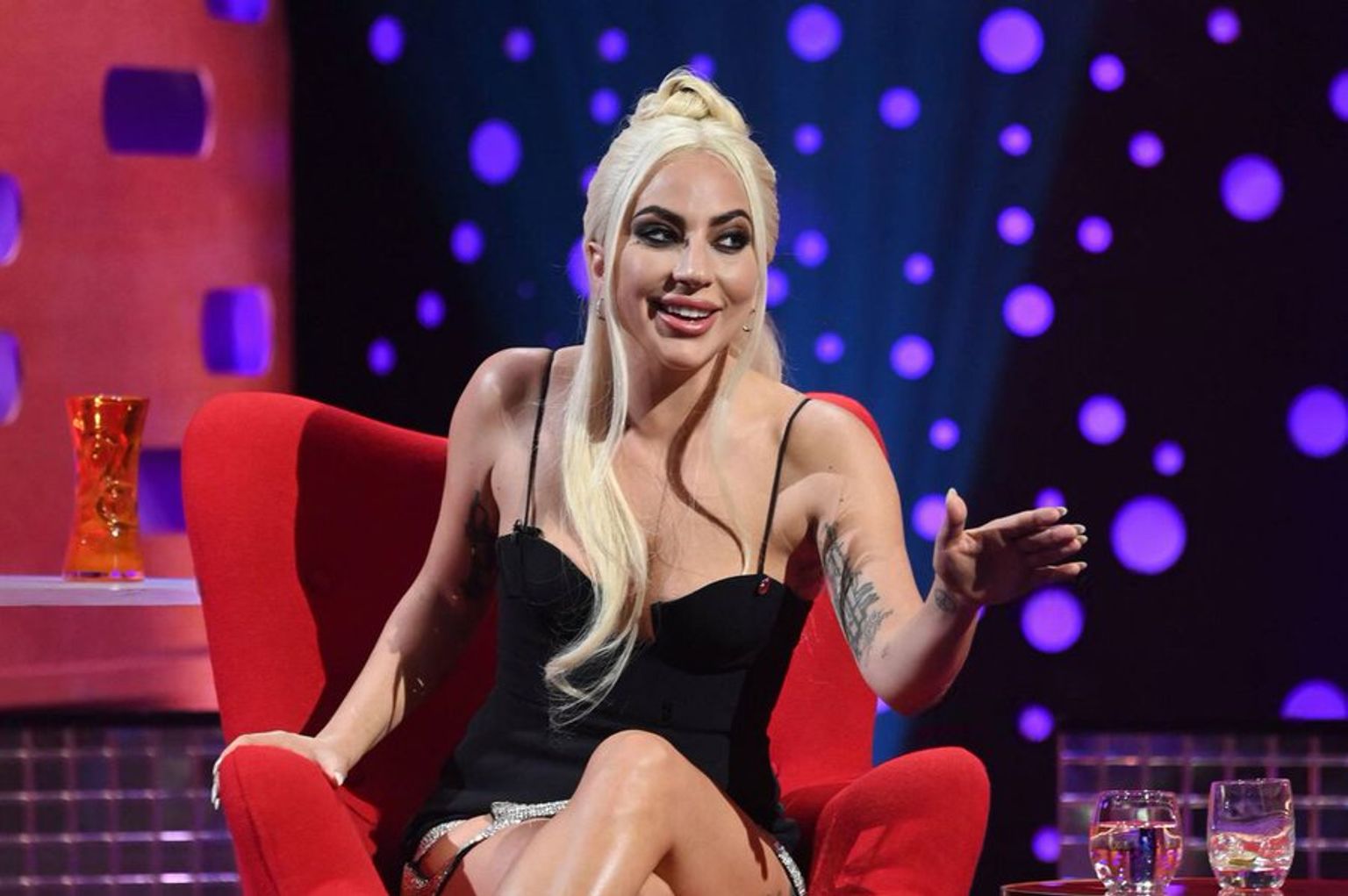 In fact Lady Gaga's lips became quite the talking point after a recent appearance on Graham Norton, where some viewers felt she had overdone the fillers and it was restricting the mobility in her lower face. But hey, she's still getting those big acting roles, so it's clearly working to her advantage!

Shelley agrees Gaga's really embraced non-surgical aesthetics: "Yes, lips - definite volume increase. Additionally, her nasolabial folds are smoother/more shallow now than her early photos. Lady G has always had defined cheeks but they’ve definitely changed over the years in a way that suggests filler, her jawline is much more defined especially at the mandible angle and her chin is narrower and less rounded."

Lady Gaga looks great BUT we are mindful of her own admission that she was addicted to fillers and we hope that she's now with a great medically-qualified practitioner who will say no to her if needed. At the Gucci premiere, while it may just have been make-up, lighting and angles (Glowday always says don't believe everything you see in photos!) the images did make us prickle a little as there seemed to be a blurring of the features that make Gaga so very Gaga. Shelley agrees: " Looking at the images of her through the years, 2019/20 are definitely the best years and she was a great advert for aesthetics back then. The most recent photos suggests she may have peaked and gone too far, but it could be bad photos." 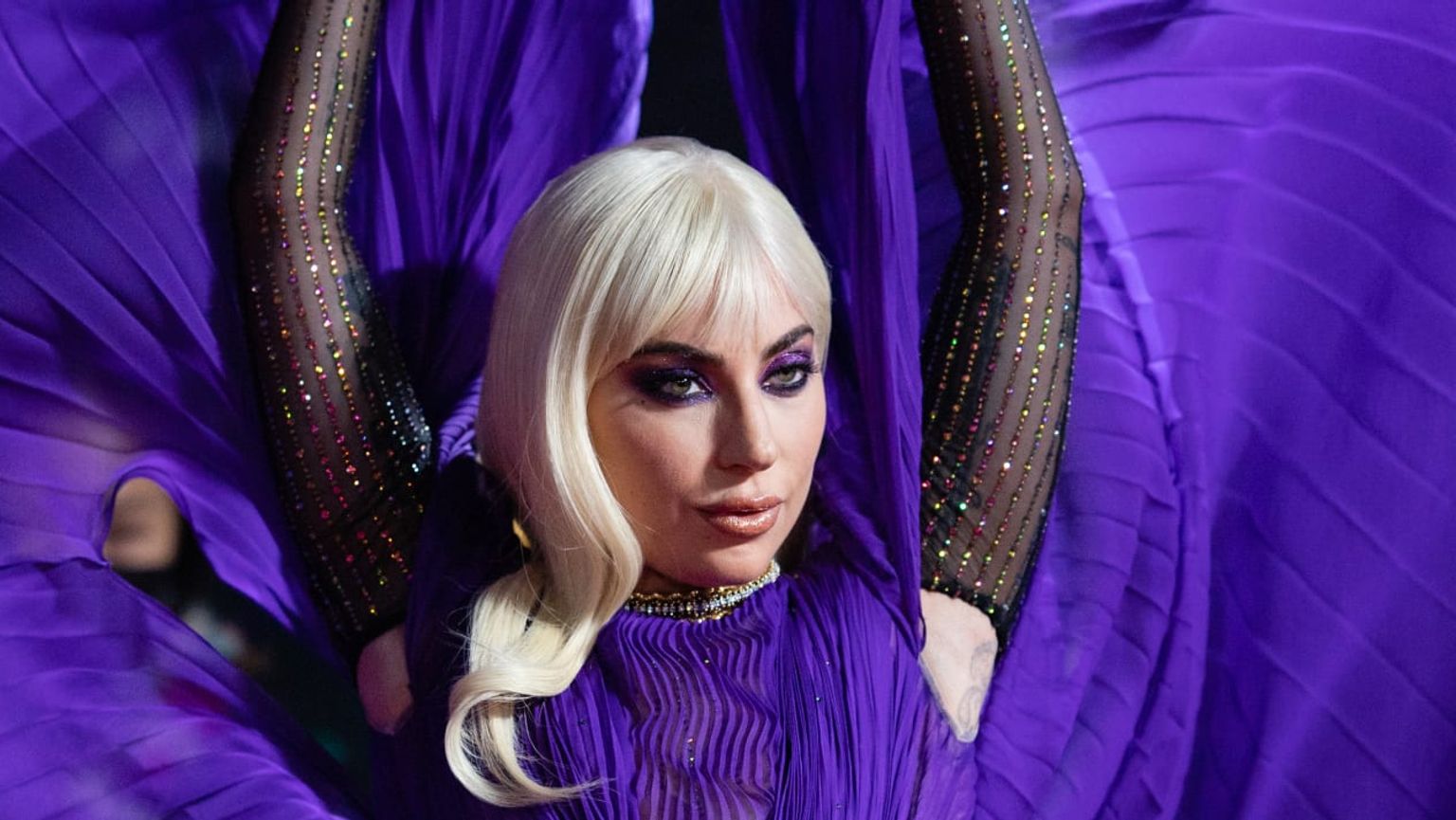 We like that face, we like it a lot, and we'd hate to see her become someone else. Keep it real Gaga!

If you're looking for someone who will only offer subtle, natural and safe cosmetic treatments, then use Glowday's search tool to find someone great near you!