Everything You Need To Know About The Non Surgical Nose Job

What’s the difference between rhinoplasty and a non-surgical nose job?

Ok, so there are differences between rhinoplasty and liquid rhinoplasty, (aka the liquid nose job, non-surgical nose job, nose fillers and the filler nose job), and we'll look at these throughout the article, but it’s worth pointing out that the key difference between the two is that rhinoplasty (or nose reshaping) is a surgical procedure, and a liquid nose job isn’t. In a traditional surgical rhinoplasty procedure, the patient undergoes anaesthetic in a surgical environment. The bones in the nose are often 'broken', or rather cut, carefully, to make the relevant changes.

Liquid nose jobs, on the other hand, are performed, non-surgically, using fillers. Yep, fillers - as in the liquid hyaluronic acid solution used to plump lips and replace volume loss in ageing skin. That filler! And the results you get from a liquid nose job can be absolutely incredible!

So, why exactly is rhinoplasty falling out of favour in place of the liquid nose job? Let’s take a look…

What are the benefits of a non-surgical nose job?

There are so many amazing non-surgical nose job benefits. Let’s break it down into the top perks

1) No anaesthesia with a non-surgical nose job

One of the main benefits of a liquid nose job is that there’s no need for anaesthetic, meaning you won’t feel groggy afterwards and can, ultimately, get on with your day. No need for someone else to come and pick you up, and no risks that come with going under general anaesthetic. Perfect!

In comparison to traditional rhinoplasty, the procedure time itself - and the recovery time - is less with nose fillers. Dr Thuha Jabbar, non-surgical nose job whizz over at Almas Dentistry and Aesthetics, says, “in terms of bruising, downtime and swelling, recovery time is significantly reduced, if not zero, with non-surgical rhinoplasty. Most people come in - even at lunchtime - to get a liquid rhinoplasty procedure done, and often go back to work after. If there’s bruising it’s, generally, a very small bruise on the bridge of their nose, which they can easily cover up with makeup. However, with surgery, the downtime is usually about two weeks. That’s two weeks of severe swelling and bruising, with a cast, and usually you need to take time off work and, essentially, put your life on hold.”

Another benefit of non-surgical rhinoplasty, compared to the traditional nose job, is that it is significantly cheaper. Dr Wafaa El Mouhebb, filler nose job pro and owner of Dr Wafaa Clinic, says, “the cost of a non-surgical nose job is about 1/10 the cost of rhinoplasty surgery, which makes this procedure more accessible to everyone.” And that is certainly something worth celebrating!

4) The non-surgical nose job is reversible

This next point could be seen as a pro or a con, depending on your perspective, but a liquid nose job, unlike surgical rhinoplasty, is reversible. The obvious benefit of this is that if you don’t like the results, you don’t have to grin and bear it. Dr Wafaa explains, “results of a liquid nose job aren’t permanent, so if you’re not pleased with how it looks, it’s just a matter of time before the fillers metabolise, or it can be dissolved using hyaluronidase.”

Whereas, with surgery, Dr Jabbar explains, “it’s permanent, so you are left with the results you get. Sadly, because of where I work and the kind of job that I do, I do see a lot of cases where rhinoplasty surgery hasn’t gone to plan, and it’s devastating for the patient, because they are left with a nose they can’t change. They then often try to seek fillers to alter the shape.”

While there are, obviously, still risks when it comes to liquid rhinoplasty, there are fewer than with a surgical nose job. Rhinoplasty risks include permanent breathing issues, cartilage damage, a change in your sense of smell, heavy bleeding, blood clots, infection, and - as with every type of surgery that requires you to go under - risk of a reaction to anaesthetic.

Of course, there are liquid nose job side effects, such as bruising and swelling, but what are the non-surgical rhinoplasty risks? Dr Jabbar says, “Whilst this procedure is growing in popularity and there’s no need for anaesthetic, there is still the risk of necrosis of the skin, blindness and visual disturbances, so patients really need to be mindful that, first of all, this is a medical procedure - a very safe one in the right hands - but one that should only be administered by a medical professional, who has the scope, understanding and confidence to perform it.” 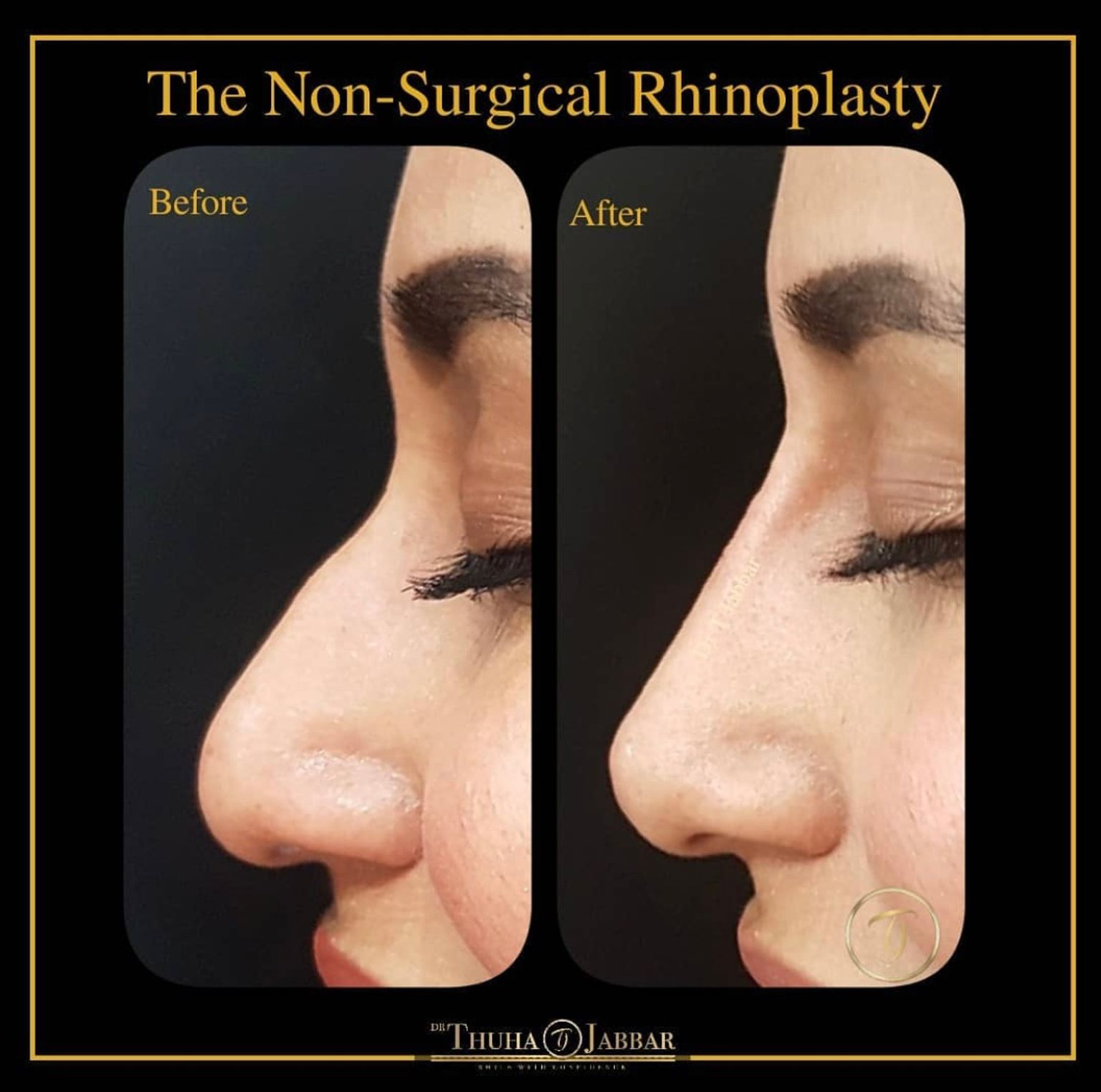 Non-surgical nose job before and after - by Dr Jabbar

What can’t a non-surgical nose job do?

So, there’s an impressive list when it comes to liquid nose job benefits! But, while the procedure is fantastic, there are certain things the non-surgical nose job can’t do. And Dr Jabbar sums this up perfectly, “We need to understand that non-surgical rhinoplasty is an additive procedure that is, essentially, playing around with the light and the way the light bounces off the nose. When the structure of the nose is smoother and less bumpy, the light is going to bounce off it in a more harmonious way, giving the appearance of a smaller nose." Um, hello but is this not magic?!

Dr Jabbar continues, "It’s not surgery, so nose fillers can’t physically make the nose smaller. If the patient is seeking a reduction in the width of the nose, non-surgical rhinoplasty can only disguise it or give the illusion of a smaller nose. There are certain dorsal humps - particularly when they are very high and very large - that we can’t fill around, as this would give a very unnatural, avatar-look, to the face.”

So, great for bumps, droopy tips and mild deviation, but Dr Wafaa explains that “if it’s more than this, you might want to consider traditional rhinoplasty instead, as a complete restoration will be needed, starting from bone till soft tissue.”

What about changes to the size of nostrils? Can a liquid nose job fix that? In a word, no. Dr Jabbar says that this, “as well as any major frontal asymmetries, septal deviation or breathing problems can't be changed non-surgically. That’s where a patient will be better off seeing a surgeon to have a surgical nose job.”

Why are liquid nose jobs growing in popularity?

According to Statista, the annual number of rhinoplasty procedures in the UK has decreased significantly. In 2013, there were 4,878 procedures, but in 2021, this number dropped to just 1,330. Clearly, people had other things on their minds last year, what with a global pandemic in tow, but with ever-growing numbers of liquid nose jobs, perhaps the decline also had something to do with the non-surgical alternative.

So, obviously, the non-surgical nose job has a range of great benefits, but what do the experts put its growing popularity down to?

For Dr Wafaa, it’s down to the fact that “we have been able to create life-changing, amazing transformations in a procedure that is reversible, has almost no downtime (as opposed to the four weeks you can often expect with surgery), and is much more affordable than a standard nose job.” She explains that “as we [practitioners] are better trained in complex cases, we have been able to provide the patients with the results they want, without surgery.”

Dr Jabbar, instead, says, “I think that the rise in the use of social media and filters, and Zoom Face, which was born out of the pandemic, have driven people to become more aware of their faces and features. With filters, in one swipe you can look so different, and I think that’s leading people to alter and enhance their appearance. Because these procedures are cheaper than their surgical counterparts, they are more accessible. Whereas, before, your only real option, if you wanted to change the appearance of your nose, was surgery, which was not only expensive, but there were longer waiting lists to see someone - not to mention the downtime after surgery." 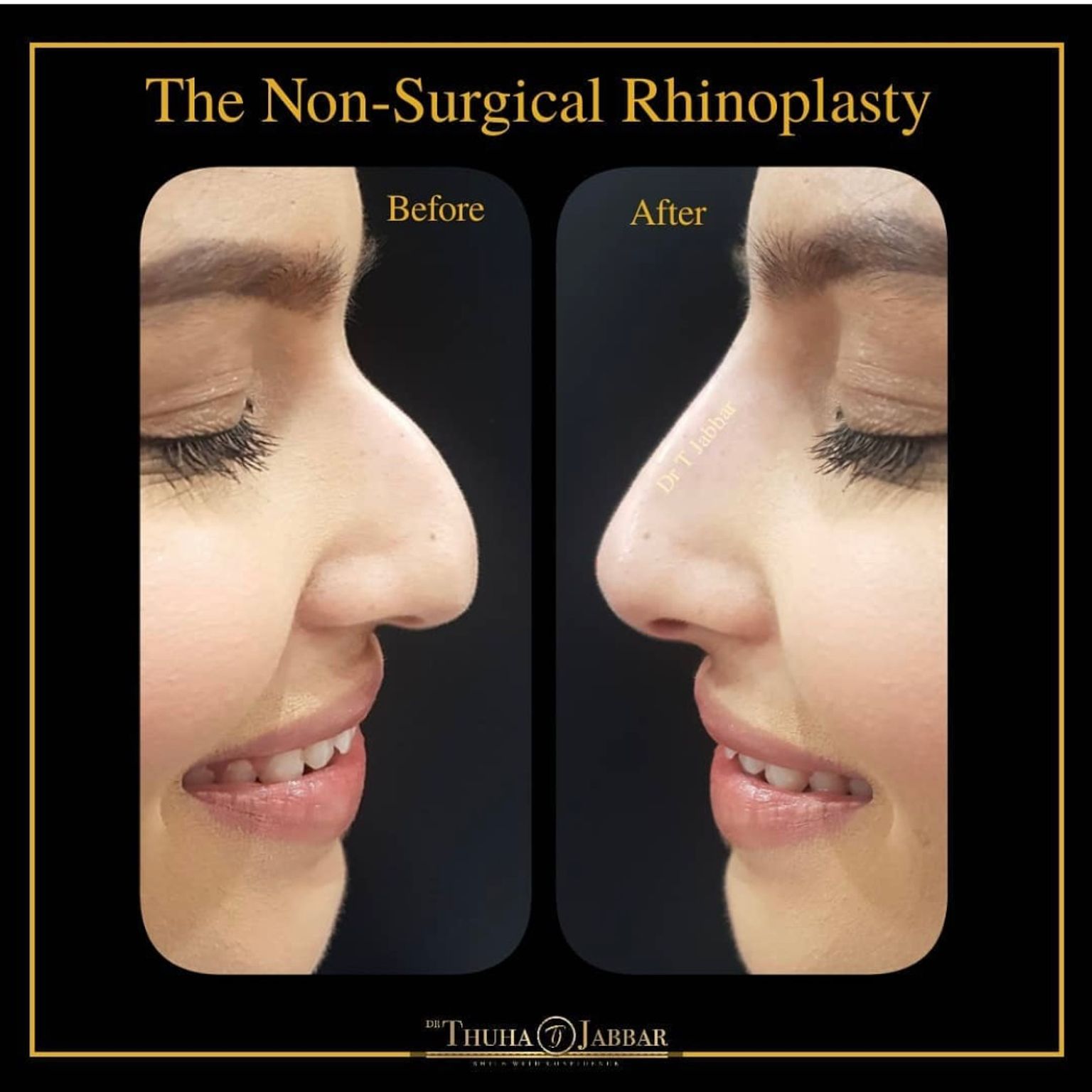 Liquid nose job before and after - by Dr Jabbar

Advice before getting a non-surgical nose job

According to Dr Jabbar, choosing the right person to do your non-surgical nose job is vital. She says, “While it is a medical procedure, finding a medical practitioner itself is not sufficient, because it is considered an advanced technique. It’s not a treatment suited to a practitioner who has just started out in aesthetics but, instead, one who has a lot of experience in cosmetic procedures - particularly non-surgical nose jobs, as they’re extremely complex.”

And Dr Wafaa agrees, explaining, “When considering non-surgical rhinoplasty, you don’t want to look for the cheapest provider, who may not have experience with this specific procedure., As well as checking their medical credentials, also find out what training they have, how many non-surgical rhinoplasty procedures they have performed, how they will perform your procedure and how they will avoid complications (they should be able to explain the procedure in detail, including information on their safety standard). Also, find out if they are trained to deal with complications if they arise, and whether there is a way to contact them in case of emergency after the procedure.”

She also believes it’s important to “build a good patient-doctor relationship with your practitioner and feel comfortable with them, because, in the end, this is a procedure that has risk and possible complications, and you want to be treated by someone who not only is well trained but who has empathy and knows how to support you during the whole treatment (in the consultation, during the treatment and after).

The final point, believe it or not, is creativity. Afterall, aesthetics is as much about medical care as it as about art. Dr Jabbar advises anyone looking to get a liquid nose job to “find someone with an artistic flair to ensure you get the results you are expecting. It’s really important that the person you go to can showcase a wide range of non-surgical nose job before and afters, has treated lots of different types of noses, and has that confidence to deliver the right results that are worthy of this procedure.”

And that just about sums it up! Liquid nose jobs are cheaper than rhinoplasty surgery, don't require going under anaesthetic, have little to no downtime, are reversible, and give great results in the right hands. What's not to love about that?

Tired of Googling “non-surgical nose job near me” and "liquid rhinoplasty before and afters", and having to trawl through tonnes of uncertain results? Find a liquid nose job healthcare practitioner in your area now on Glowday, and feel confident that you’re in safe hands.

Everything You Need To Know About The Non Surgical Nose Job